To celebrate the 10th Anniversary of the Wild Bird Club of the Philippines, Club Secretary Maia Tañedo compiled this list of the 10 Most Common Urban Birds in the Philippines
space

Did you know that you can see at least 10 different kinds of birds in the city? To non-birdwatchers, the idea of seeing ten different bird species in the middle of a busy concrete jungle is quite hard to imagine but you’d be surprised to know that they are there, usually going unnoticed.

Here is a list of the top ten birds that can be seen in the city (plus some fun facts too!) Read on and discover how many you’ve actually seen and have in your neighborhood.

Of course, the bird that would quite obviously make it to the top 1 spot is the Eurasian Tree Sparrow, more commonly known as the maya. This little brown bird can be seen everywhere in the city: from your backyard, to the sidewalks, to the busy business centers, and almost everywhere else in the city! That is why most people assume every bird that flies past is a maya.

The Eurasian Tree Sparrow or ETS is a species which was (very) successfully introduced in the Philippines. It usually forages on the ground and in trees and its diet consists mainly of seeds and grains, but has adapted to whatever available food in urban areas (foraging in garbage, etc.) 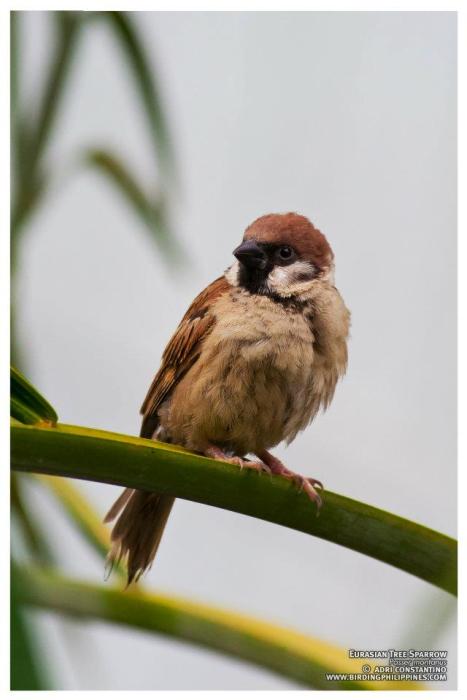 Have you looked closely at the ETS? Photo by Adri Constantino.

Fun Fact: Did you know that this maya bird was not the former Philippine National Bird? Yes, the Eurasian Tree Sparrow is called maya but in the Philippines, local names are used for a number of similar species. The former national bird was the Chestnut Munia, which is also locally called “mayang pula.” 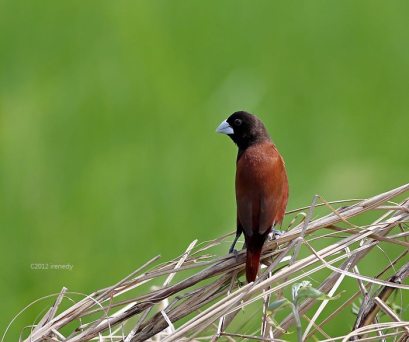 The second most common, and most overlooked, city bird is the Yellow-vented Bulbul or YVB. With most people assuming that all birds in the city are mayas, the YVB goes unnoticed despite its larger size. It is significantly larger than the maya and has very distinct markings: white eyebrow, black eye stripe, a long tail and a flash of yellow on its vent (lower belly, just before the tail) for which it got its name.  Some birds even sport a noticeable mohawk. The YVB actively feeds on berries and fruits and can also nest in urban gardens.

Try to keep your eyes out for Yellow-vented Bulbuls in your garden. Photo by Adri Constantino.

Fun Fact:  The term “bulbul” is actually derived from the Persian word “bolbol” which means “nightingale.” These birds, which we only just read about in books, are actually all around us and have an assortment of bird calls. They have been observed in many a birdwatcher’s garden, nesting in low shrubs and also feeding on ripe finger chili and berries. 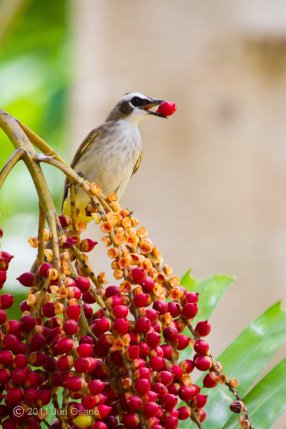 YVBs like feeding on ripe berries! Photo by Jun Osano.

The Pied Fantail, locally called Maria Capra, is another common city bird. It is black and white, with a very distinct long tail which it fans out thus its name. The Pied Fantail can be heard singing melodiously in the early hours of the morning. These birds can be very territorial especially if they have a nest nearby. They get people’s attention when they swoop around, “attacking” dogs, cats, and sometimes even people who get too close to their nest. 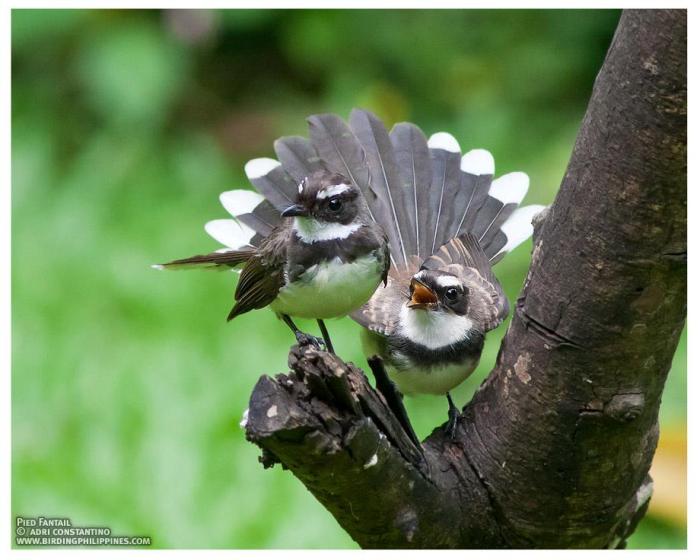 A pair of Pied Fantails fanning their tails! Photo by Adri Constantino.

Fun Fact: “Pied” means “black and white” in birding language. Another “pied” bird that finds its way in green urban areas is the Pied Triller (which unfortunately did not make it to the top 10.) 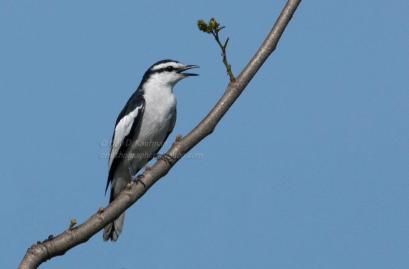 Keep an eye out for another black and white city bird, the Pied Triller. Photo by Bob Kaufman.

We have been used to reading about beautiful, long-beaked hummingbirds in the US and guess what, the Philippines has its own family of similar birds – sunbirds! The most common species which can be found in urban gardens is the Olive-backed Sunbird. This small skittish bird has a very distinct long, thin beak which it uses to sip nectar from flowers. It’s back is a uniform olive color while its body is yellow. The male Olive-backed Sunbird has a beautiful metallic purple throat which differentiates it from the female. They can be seen fluttering around flowering plants such as heliconias and gumamelas, calling  “swit-swit-swit.” 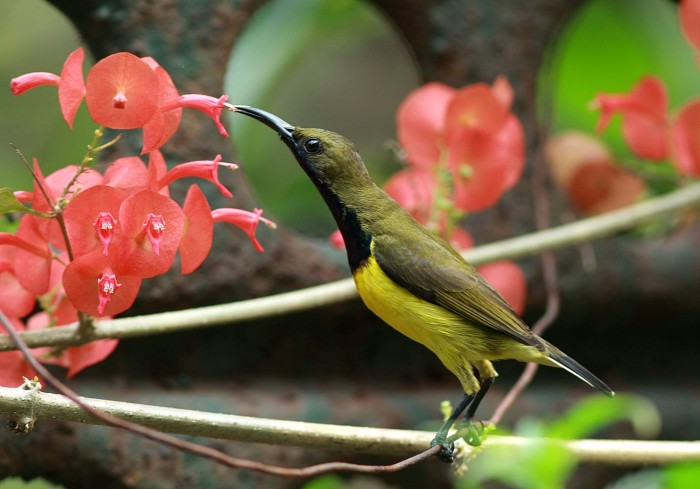 Fun Fact: Some birds have different markings for the male and female. The female Olive-backed Sunbird, though the same overall shape, size, and coloring as the male, lacks the metallic purple throat. It is uniformly yellow on its throat and belly. 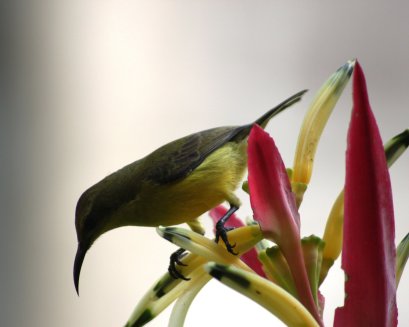 The Zebra Dove is another common city bird, usually seen foraging on the streets and sidewalks in our neighborhood. It is a grey bird with thin barrings (horizontal lines) on its upper parts. If you look closely enough, you will also see pinkish coloring on its chest and a bluish face. The local name of this bird is “bato-bato” which describes how the Zebra Dove can stay perfectly still and look like a “bato” or rock on the road. It also goes by other local names which are based on the sounds it makes: tukmo and kurokutok. 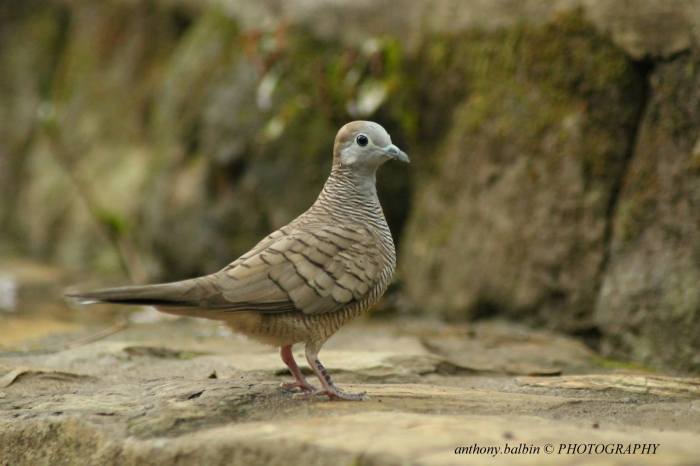 When you look at it closely, you’ll see the fine markings on the Zebra Doves chest and body. Photo by Anthony Balbin.

Bird Call: Here is a link to the call of the Zebra Dove. Listen and check if you’ve been hearing it in your neighborhood and discover why it is locally called “kurokutok.”

One of the more colorful city birds, the Black-naped Oriole usually escapes a non-birders eye. But even birdwatchers may have difficulty spotting this yellow and black bird, as it blends very well with the green leaves on tall trees it likes to perch on. It is a medium-sized bird with a strong pink beak and a black mask around its eyes. Quite active and noisy birds, Black-naped Orioles can be seen calling loudly from tree tops, sometimes chasing each other through the trees. 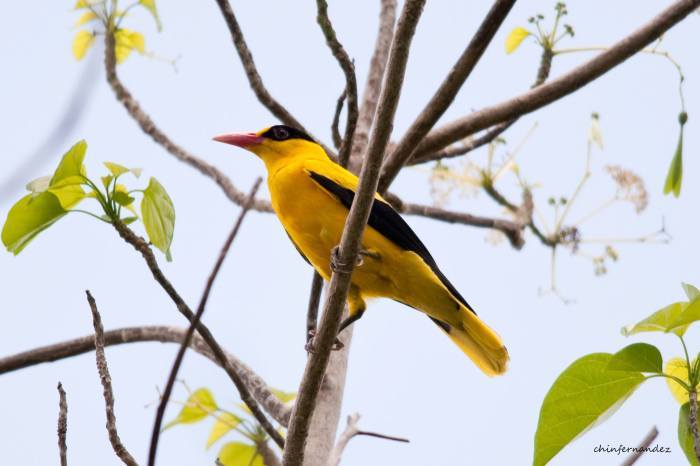 The brightly-colored Black-naped Oriole can be quite difficult to find even if it is bright yellow. Photo by Chin Fernandez.

Have you ever noticed a melodious song of an unseen bird, most probably coming from a mango tree in your garden? That is the song of the Golden-bellied Flyeater. Usually more often heard than seen, it is another bird that lives in the city. The Golden-bellied Flyeater has uniformly olive brown back and pale yellow underparts. It is usually very skittish, hopping from one branch to another. 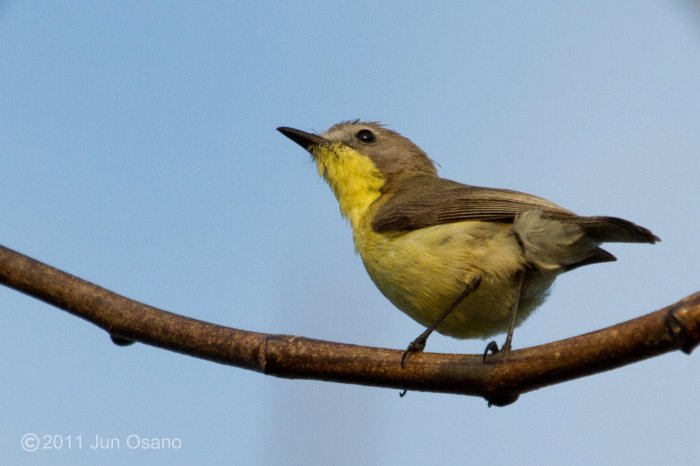 Bird Call: Here is a link to the call of the Golden-bellied Flyeater. Listen and check if you’ve been hearing it singing in your neighborhood.

Did you know there are blue-colored birds that can be found in the city? The White-collared Kingfisher is a blue and white bird and is the most common kingfisher that can be seen in urban areas. It has a dark blue, almost black, head and blue wings and back. Its underparts are white and it has a long, black beak. It calls with a noisy “ka-ka-kak ka-ka-kak” usually from high perches and eats a variety of food: from small fish, crabs, grasshoppers, and even lizards. When it hunts near water, it dives quickly snaring its prey with its long beak. 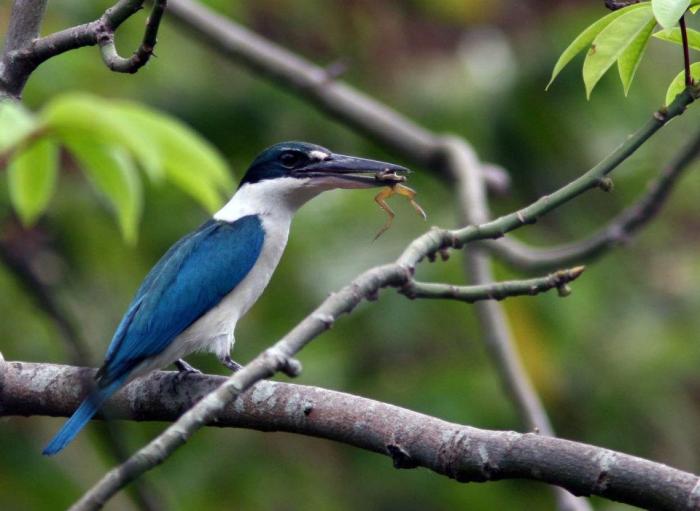 White-collared Kingfisher having a meal. Photo by Ixi Mapua.

Fun Fact: Birds do love a bath especially in the summer! WBCP member Ixi shares her photos of a White-collared Kingfisher taking a dip in her pool! 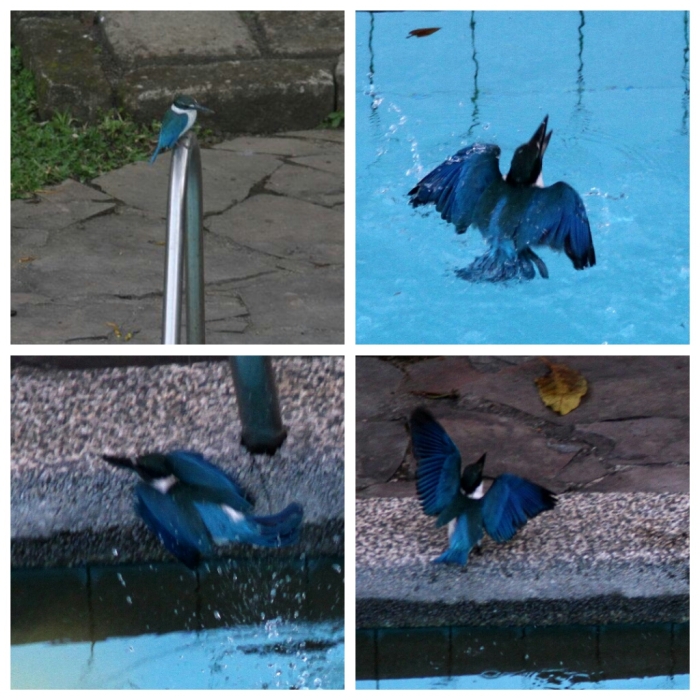 Here’s a photo collage of a White-collared Kingfisher diving in the pool. Photos by Ixi Mapua.

Yes! We do have woodpeckers in the Philippines and one species can be found in the city! The Philippine Pygmy Woodpecker is another bird that can be seen in urban areas. It creeps up and down and even around branches, pecking away at bark to either look for food or build a nest. Its call is a loud trilling sound, which has been described as sounding like a tiny machine gun. 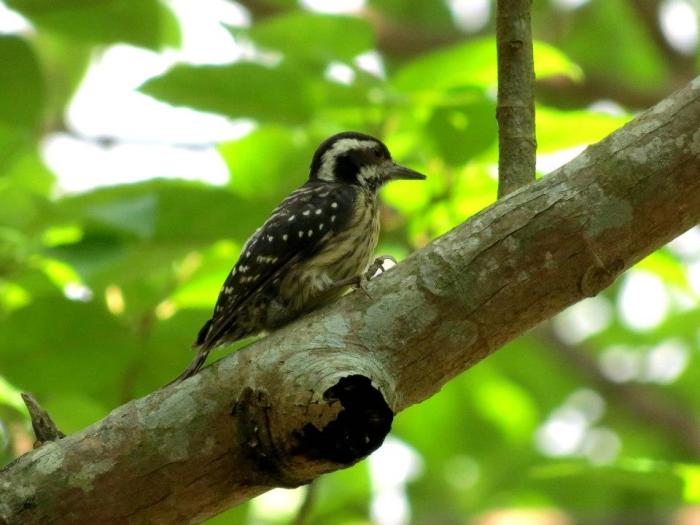 The Philippine Pygmy Woodpecker can be seen creeping up and around tree branches. Photo by Jasmin Meren.

Fun  Fact: Yes, Woody Woodpecker is based on a real woodpecker, reportedly a Pileated Woodpecker which is an American species. In the Philippines, we have similar-looking woodpeckers that can be found in our forests like this Greater Flameback. Awesome aren’t they? 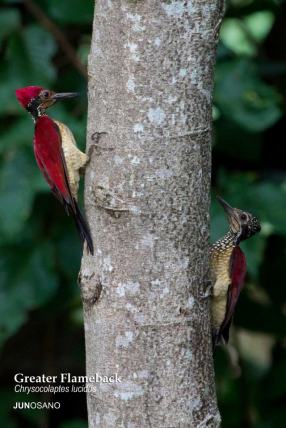 A pair of Greater Flamebacks looking a bit like Woody Woodpecker. Photo by Jun Osano.

The tenth bird included in this list is the often unnoticed Pacific Swallow. These birds are seen either flying and gliding around or perched on electrical wires. Pacific Swallows have a  moderately forked tail and reddish forehead, throat, and upper breast. The upper parts and wings are dark blue and the tail is black. These birds have adapted to urban areas and can be seen nesting in cup-like nests in the eaves of houses and buildings. 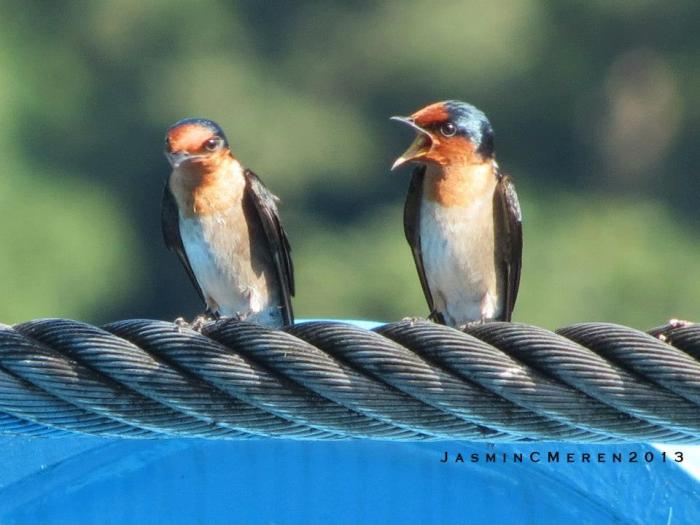 A pair of Pacific Swallows. Note the colorings on these birds. Photo by Jasmin Meren.

Fun Fact: An abundant migrant to the Philippines is the similar Barn Swallow. It can be told apart from the Pacific Swallow by long outer tail feathers and a black band across its chest. During migration season, watch out for swallows flying overhead and try to differentiate between Pacific and Barn Swallows. 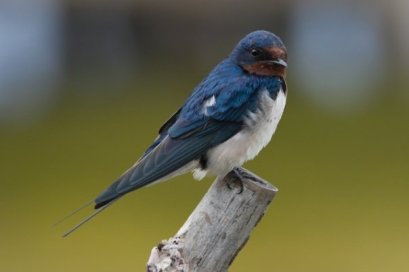 This is a Barn Swallow. Notice the long outer tail feathers and black breast band which the Pacific Swallows don’t have. Photo by Jun Osano. 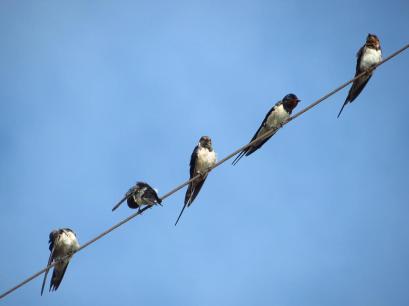 Swallows can usually be seen perched on electric wires. Photo by Vincent Lao.