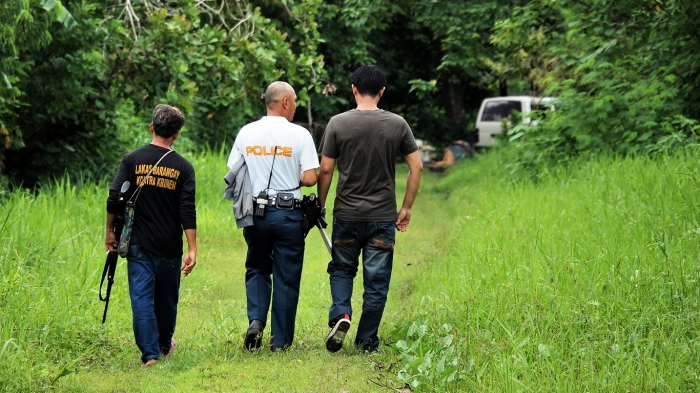 I was at the usual waiting spot in UP Los Baños trying to get closer pictures of a pair of Greater Painted Snipes. They were hesitant to come out of the rice canopy. While I was waiting, I spotted this very familiar looking guy. I had posted his pictures before, scooting away with rifle and paraphernalia, dressed in a barangay tanod shirt no less. Was he a hunter? He seemed to know very little of birds.  If he was really hunting for food, why was he ignoring the rails of various kinds that continued to preen or shake off water from their feathers right on the dikes, bunds and grassy roads back of the agri park? Then he raised his rifle, a compressed air gun, and fired off a few shots. This guy was shooting small birds for fun! I squeezed off a burst of shots myself, capturing a few pictures.

I raced to the guardhouse and requested the security staff there to notify University police about the poacher’s presence and location. I could hear him discharging more shots, now from inside the wooded area of agri park. Two men from the University police arrived within 5 minutes and I directed them to the location of the poacher. The police were not slow-footed either, as they followed me quickly through the tall grass and thickets and the muddy road. The shooter was cornered in a small clearing near the irrigation tubes.

When he was confronted, he admitted that he was just shooting birds for fun (katuwaan lang) and had in fact not hit any bird yet. He started pleading to be released, name-dropping his employer (a retired university professor) who has a house nearby. He even said this was his first time, although his equipment indicated otherwise. I told him he should choose another pastime and he could actually be in trouble. He could be jailed under the law if show his picture taken in the area months back – in his barangay tanod uniform and rifle.  The police brought him to University police headquarters to be processed. By the time it was over, my snipes had retreated inside the canopy for the night.

I wish to commend the university police for acting with dispatch. Without knowing the person, his exact weapon or weapons, and predisposition, they did bravely apprehend the offender. I was prepared to blind him with my not so benign green laser if he even tried to lift and level his rifle! Next time, I hope we bag those rich brats playing soldiers shooting against their fantasy army of pipits and munias. Cowards!

It is apparent that these guys time their incursions when the police patrols are over or in other areas. The police are stretched thin and we cannot blame them. But they did respond very fast, so notifying the authorities is important and always effective.