Hi everyone! Brr, its cold outside. Are you like me, snuggling into your blankets at the start of the day, or dreamily staring out into space thinking of all the birds you can’t see because its non-birdy weather, looking forward to the dry season when everything is flowering and fruiting? Well, here’s an article to serve as a stopgap for those missing birds at their nosiest and most active. Last October, 2017 I got the chance to interview Dr. Caroline Gross, an Australian biologist whose expertise is on pollination networks. Pollination networks represent the linkages between a floral community and the pollinator community. If the article becomes a bit too much, then there are still lots of photos contributed by WBCP members that you can look at. First photo shows the Luzon Sunbird with a bit of pollen on its beak (marked with a pink arrow). 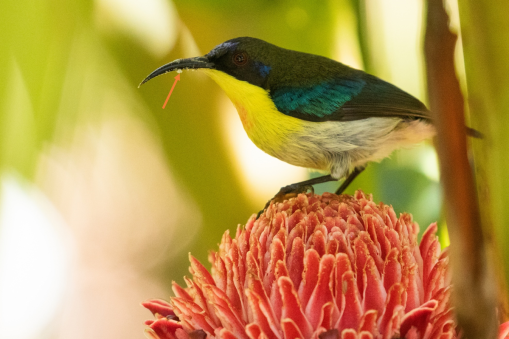 Nikdye: Can you explain a little bit of what you do in terms of pollination?

Dr. Caroline Gross: I am a plant reproductive ecologist and am interested in the production of seeds, and how they end up in the seed bank. But before all of that happens is the wonderful area of pollination, and it’s not just about floral visitors because not all floral visitors are pollinators. I like to understand the complexity of the community from the pollination point of view and in most places we know very little about that. It can be useful for understanding how to look after endangered ecological communities and how to use it as a decision tool for restoration.

Nik: Can you explain what pollination is? How does it actually happen?

DCG: Pollination involves the transfer of pollen from one flower to the female parts of the same flower or another flower. The pollen comes from the male structures in the flower and that plant may not be able to self-pollinate. In any case, it’s probably better that the pollen finds a new home, it goes to cross-fertilize, and so it’s the process of looking at that pollen transfer. We often can’t see the pollen, we look at the animals and how they are using flowers to see whether or not they are what we call bonafide pollinators.

Nik: Why is it important for the pollen to not land in the same flower that it came from?

DCG: That would bring about possibly the deposition of self-pollen, pollen from the same flower ending back on the female parts of the same flower that will lead to inbreeding.

Nik: What exactly are those sunbirds doing on those banana flowers?

DCG: Nectar is the primary enticement that flowers use to get a visitor to come to them. Vistors, like sunbirds, need nectar to maintain their carbohydrate needs, it’s an energy source for the birds. Some flowers like banana flowers, we think replenish nectar throughout the day. So they get a lots of visits so they keep producing it, get the animals interested in coming back to the flower.

Nik: Aside from nectar, what are other attractants for the animals that flowers produce?

DCG: Some bees harvest oil that’s produced on flowers, pollen itself is a major food source for bees. Not so much for birds. Some flowers only offer pollen, no nectar. They lose a bit to the bee but they also get pollination happening at the same time. 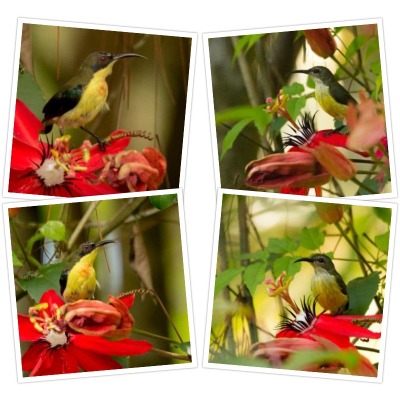 Nik: So when birders observe and/or take photos of a specific plant with the sunbirds on them, how does it relate to the surrounding ecosystem as a whole network?

DCG: The more you watch, the more you’ll understand that you get different visitors coming in, different species, and different individuals of the same species. You can build a picture of how important that plant resource is to important bird fauna in the area. We can understand things about the foraging behavior of birds, their temporal activity. We often see territorial behavior among birds as they try to procure and secure a suite of plants for their own use. It’s something to watch and enjoy when there’s a number of plants flowering in the area to see the birds take-over their patch and prevent other birds from coming in. That’s an energy taxing activity, defending your patch, you need energy to keep doing.

Nik: How big in terms of area would this kind of networks be?

DCG: Depends on the types of animals you’re working with. Some birds may have a much small area, like the sunbirds. Other birds may go kilometers within a day to get their payload. For example, Australian wattlebirds they can go quite big distances to secure a resource. I certainly see that in fragmented landscapes. We’ve got paddocks with just grass, patches of shrubbery. You’ll see the birds moving across those matrices to get to resources; the bigger the bird, the further it will go. This information can be used to help restore landscapes, to understand how many clumps of plants you need, in what spatial arrangement. 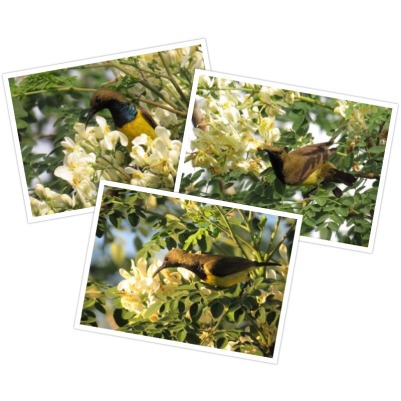 Nik: If I am looking at a flower with a visitor trying to take pictures, what am I looking for?

DCG: You are looking to see whether the animal during that one visit does two things. The nectar is kind of irrelevant. Does the bird touch the stigma of the flower, and is it also collecting and transferring pollen during that visit? Does the head go into the flower? Is the pollen being collected onto the head of the bird? Does that mean that it also could theoretically be transferred to the stigma of the female parts?

DCG: It could actually draw the animals away from the native plants so the native plants don’t get as much visitation. They certainly become very habitual about expecting those resources from feeders, I’ve seen that in Australia. The other thing is I think the population number will increase when you do provide those additional resources to birds so that might have consequences, it could be a good thing. But when you provide a superior resource, animals will use it and there may be side effects to other species of shrubs and trees not being visited. It would be an interesting study.

Nik: Birders are actually planting ornamental plants (mostly bananas, and sometimes even native gingers) to attract birds. How would this affect the whole pollination network?

DCG: That’s not a bad thing, in suburbia (residential) areas and similar places, that’s a good thing. In a sense, all of us would prefer native species to be grown, but you’d be surprised at the number of introduced species/ornamentals that native bees and birds would use. It provides habitat, so I think that the best thing is to have a mix of things. People should grow what they like, but they should be mindful of where they are living. If they are living very close to the bush (forest), they should turn down growing invasive ornamentals. But having a mix of things is not going to be a problem, it’s better to have something on the ground flowering than nothing.

I hope you learned something new from the article, pay more attention to what those sunbirds are actually doing after getting your perfect bird profile shot, and mindfully create habitats that will support the ecosystem around where you live.

For more about pollination, plant reproduction and ecosystem work by Dr. Caroline Gross, check the link: https://www.une.edu.au/staff-profiles/sabl/cgross. For pollination matters in the Philippines, visit: https://www.facebook.com/UPLBBEEPROGRAM/.