Lucban is a municipality spread over 130 kilometers and has around 54,000 inhabitants. It can be reached by car from Alabang, Metro Manila in 2.5 – 3.5 hours. It is bordered by Majayjay and Luisiana towns in Laguna province and Sampaloc and Tayabas towns in Quezon Province. Lucban is a landlocked municipality, but is only around 20 km away from the Pacific Ocean and 20 km from the Tayabas Bay.

Lucban stretches from around 150 to 1,900 meters above sea level. This means that we can also find highland birds within certain areas of the municipality. However, the area of highland belonging to Lucban is small in size and difficult to access, but it is forested. Lucban belongs to the southern most areas of the Sierra Madre. Therefore we can expect to find those birds that belong to the southern Sierra Madre habitat.

The majority of the landmass of Lucban is between 400 and 450 meters above sea level. This causes a much cooler climate than in the lowlands. Lucban is also very green, there are trees everywhere. However, primary forests are not anymore to be found. Most areas with lots of trees are neglected coconut plantations and areas too steep to use for anything else. The Banahaw Protected Landscape also covers the Banahaw mountain area belonging to Lucban. This has some primary vegetation, but most trees are small even though they can be very old. This is because of the steepness of the slope and the very strong winds that pas through the area during typhoons.

Lucban is extremely wet. It has an annual precipitation of around 5,200mm. There is no real dry season. During the months of October to January it is mostly too wet for any outdoor activities. Same for birding.

There are some sizable mountain rivers running through the municipality, but at least half of those are so polluted that there isn’t any bird life typical for river habitats. Moreover, even the fairly clean rivers are being over fished and shrimps are being caught in such intensity that there are hardly any left for the typical birds that feed on these organisms. But this doesn’t mean that no birds associated with rivers and streams can be spotted, they are just not as abundant as they would have been if the streams and rivers were clean and full of life.

For birding, the best season is March to May. There are many fruiting and flowering trees fruiting that period and the migratory birds are still present in March and April.

This doesn’t mean that other months are not good for birding at all. There are fruiting trees all year round.

Lucban is an area where the large flocks of migratory raptors pass through, mainly during May and October. As there are quite a lot of spots with good views of the sky, one can observe these flocks passing by. As far as I could identify, these are mostly flocks of Grey-faced Buzzards and Chinese Goshawks.

Because of the difficult terrain in most forested areas and the often very wet weather, I do not think Lucban can be a regarded as a prime spot for bird watching, combined with the fact that the density of bird life isn’t very high. However, if the Maapon Gorge will get a protected status and some infrastructure gets implemented there, and also in the Banahaw Protected landscape, this might change.

Over the past 6 years that I have been watching birds here, and as I live in a place with patches of secondary forest, I have been able to identify 136 bird species. Among which some very rare ones like the Grey-headed Fish-eagle. One can fairly easily spot 35 species in a day provided several types of habitats are covered.

Birding here is absolutely enjoyable if one has an eye also for the flora, waterfalls, and nice views. There are quiet areas filled with sounds of nature like several kinds of cicadas, crickets, frogs, and the rumbling sound of the waterfalls. I haven’t been birding a lot in the 800 meters above areas, so I can’t say much about the highland birds around here.

One of the typical highland birds spotted is the Fire-breasted Flowerpecker.

One of the last bastions of nature in Lucban is the Maapon Gorge, a gorge shared with the municipalities of Luisiana and Sampaloc. It is a very scenic and natural area with many waterfalls and still quite a lot of the less common and some rare bird species. However, they are mostly hard to see because of the density of the vegetation and the type of terrain which consists of many steep slopes and gorges.

During migration season one can spot typical riverbank birds along the Maapon River like the Yellow Wagtail, Little Heron, Grey Wagtail, White-throated Kingfisher, Common Greenshank, Indigo-banded Kingfisher, Great Knot, and some egrets. This is where I also saw very well the Grey-headed Fish-eagle.

As the Maapon Gorge in Barangay Piis is quite well protected against logging and charcoal manufacturing the last few years, I could spot new arrivals in the gorge like the Philippine Fairy Bluebird, Yellow-breasted Fruit Dove, Amethyst Brown Dove, and the Philippine Dwarf Kingfisher (only spotted once.)

Raptors are also commonly seen, especially the Philippine Serpent Eagle and the Oriental Honeybuzzard are almost always there. Also frequently seen are the Brahminy Kite and the Barred Honeybuzzard. Less so are the Grey-faced Buzzard, Besra, Philippine Hawk-Eagle (a few years ago quite common, but the last few years not seen anymore), Chinese Goshawk, and Eurasian Kestrel.

The Maapon Gorge is the last bastion in Lucban for the Rufous Hornbill. Recently we had a pair living there and they can be heard almost daily. At the moment, two immature birds are with them, so there are 4 now. However, a few years ago we could sometimes see up to 7 of these birds. This hasn’t happened recently but that flock could still be spotted now and then, while the current 4 birds that living there seemingly permanently. Also, the Luzon Tarictic Hornbill can be frequently seen and more so heard. 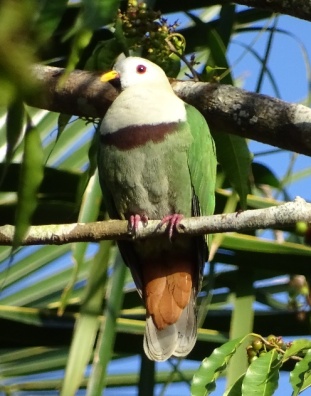 Night birds which are commonly heard in the secondary forests are Philippine Scops Owl, Philippine Eagle Owl, and in the Maapon Gorge the Philippine Hawk Owl. The Great-eared Nightjar became less common recently while the Philippine Nightjar can be heard a bit more often.

Of course, the Rough-crested and Scale-feathered Malkohas are quite common as well as the Balicassao and the Philippine Bulbul which are both the most commonly heard and seen forest birds here. With the Grey-backed Tailorbird and the Philippine Bulbul as absolute most commonly heard and or seen birds in most of Lucban forested areas. Also the Elegant Tit, Guaiabero, and the Colasisi are common.

Lucban’s terrain is such that we can also find many small rice fields, small marshes, and some ponds. Here we have the common birds like the Barred Rail and the White-breasted Waterhen everywhere and to a lesser extent, the White-browed Crake and the Plain Bush-hen. The Cinnamon Bittern and Yellow Bittern can be frequently seen along these marshes and rice fields as well as the less common Grey and Purple Heron, Little Heron, and Black-crowned Night Heron. Even some rare water-related birds can be seen sometimes like the Black Bittern, Greated Painted Snipe, Green Sandpiper, and Philippine Duck. During migration season the Common Kingfisher is also here while the Collared Kingfisher is here only between February and August.

In many areas in Lucban, the Large-billed Crow is a serious pest, even for the wild birds. They attack their nests and eat the eggs and chicks, and the raptors are being chased and harassed all the time. The local people say that the cause of the many crows are the chicken farms which are spread over most of the municipality.

To conclude this short story about the birds in Lucban, obviously there is still a vibrant and reasonably rich bird life. But there are no really protected areas.  Hunting and trapping are still going on. There is no infrastructure to visit the natural areas of the municipality. To visit the Maapon Gorge, one can go to Barangay Piis and ask around. There are guides available for those who want to visit the impressive waterfalls. To check out the highland birds one can ask at the SLSU school for a permit to walk the trail in the Banahaw Protected Landscape.

See below the list of birds I could spot and identify within the municipality of Lucban.