The Asian Waterbird Census 2018 at Tanza, Navotas
by Tinggay Cinco

The Wild Bird of the Philippines in collaboration with the Bureau of Biodiversity Management (BMB) of the Department of Environment and Natural Resources (DENR) joined the Asian Waterbird Census (AWC) scheduled last January 20, 2018. The annual survey is usually scheduled from the first to the third week of January to monitor the migratory waterbirds. For 2018, the BMB assigned a single day for the simultaneous counts of waterbird populations proximate to Manila Bay, particularly those of Metro-Manila, Bulacan and Cavite to prevent and minimize the double counting of these avian species.

As an overview, the Asian Waterbird Census launched in 1987 at the Indian Sub-continent as part of the International Waterbird Census that supports the conservation and management of wetlands and waterbirds worldwide. Currently, there are 26 participating countries from all over Asia covering more than 5,700 natural and man-made wetland sites. What are considered wetland sites? According to Wetlands International, wetlands occur where the water meets land which includes mangrove forests, rivers, lakes, rice fields, flood plains, etc, that exist in every country and is an important water source supporting all life forms. Citizen-scientist volunteers together in cooperation with government and non-governmental agencies join forces to undertake the survey of waterbirds and wetlands for data gathering to identify bird species, its protection and further conservation. The Philippines being strategically located in the East-Asian Australasian Flyway Zone and a feeding ground during the winter migration season becomes an integral part of the Asian Waterbird Census.

The Mangrove Forest of Tanza. Continued dredging activities along the Navotas coastline of Manila Bay 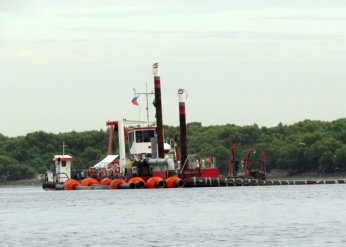 The Mangrove Forest of Tanza. Continued dredging activities along the Navotas coastline of Manila Bay

In the early morning of January 20, 2018, WBCP members President Willem Van de Ven, Dr. Lala Espanola, Jelaine Gan and I volunteered for the Asian Waterbird Census of Tanza, Navotas. Team WBCP also met up with a group from the DENR who were assigned to do a survey of Navotas. To ensure a wider coverage of Tanza, the WBCP group was further divided into two teams. Dr. Lala and Jelaine did half of the 2.4 kilometer beach front by walking along the shore and forest edge of the Tanza Magrove Forest in Sitio Pulo. Willem and I on the other hand covered the other half of the Navotas coast by cruising along Manila Bay by banca, reaching the mudflat boundary of Navotas, prior to Obando, Bulacan.

Willem fetching Dr. Lala and Jelaine along the shore of Sitio Isla Pulo, Navotas. He had to wade in the knee deep waters of Manila Bay to be able to reach and assist them back to the boat.

Willem fetching Dr. Lala and Jelaine along the shore of Sitio Isla Pulo, Navotas. He had to wade in the knee deep waters of Manila Bay to be able to reach and assist them back to the boat.

The Landfill became our boundary for the survey. The garbage pile has become much visible from the vantage point of Manila Bay. Its volume has gone beyond the height of the mangroves. The mangrove forest used to hide the pile of garbage during the past years. 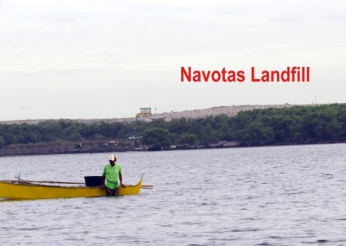 The Landfill became our boundary for the survey. The garbage pile has become much visible from the vantage point of Manila Bay. Its volume has gone beyond the height of the mangroves. The mangrove forest used to hide the pile of garbage during the past years.

Having cruised Manila Bay several times from Navotas, I surely felt like a veteran doing the 2018 AWC! Experience has taught me that doing waterbird counts on board the banca was always my best personal option. I have already treaded and fell in the mud and sludge several times during past birding trips to Navotas. Our guide Navotas Joel had already extracted me in the knee deep soft sand in the past, that this year he constantly warned me not to get off the boat! Now its Willem’s turn to have the baptism of fire by walking in the mudflats of Tanza.

Willem successfully crossed over to the mudflats. He experienced first time birding with a scope in knee deep mud amidst the plovers, sandpipers and shanks. Stayed on the banca as per advice of our guide Joel and the boatmen for fear of having difficulty extracting me from the mud! 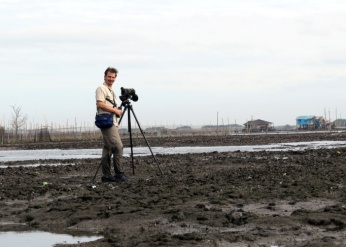 Cruising along Manila Bay close to the coastline of Tanza was a very pleasant experience. Thousands of Whiskered Terns, hundreds of Black-headed gulls were flying along side the fishermen. The cruise even gave Willem a lifer of the Gull-billed Tern . It was a cool and breezy morning coupled with the calm waters of the bay, only to be disrupted by the stench of garbage from the landfill! 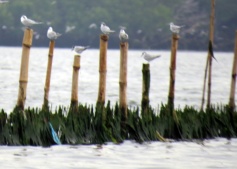 Our survey for the Asian Waterbird Census officially ended by eleven o’clock in the morning, after almost four hours of observing both the shores and bay side of Navotas. Data from both teams of the WBCP and DENR were collated arriving at a total of 3,792 waterbirds and twenty five (25) waterbird species identified. Highlight species were the 2,506 Whiskered Terns, 513 Kentish Plovers, and the more than 200 Black-headed Gulls. The presence of the five (5) Chinese Egrets was indeed a major sighting. Though the number of these Chinese egrets have dwindled over years, their presence still affirms that Navotas is still an important habitat for these wintering critically endangered bird species.

The 500 meter bamboo bridge that used to exist that linked the Navotas mainland from Tanza to Sitio Isla Pulo. Photo was taken during a club trip in 2013, February.

Garbage carpeted the beach of Sitio Isla Pulo in 2014, November. During this time, we already used a banca to cross from mainland Navotas.

In hindsight, Navotas is still one of the most challenging birding sites I ever have visited. Walking on its slippery mudflats and piles of garbage on its beaches are some of the hurdles that one should overcome. Five years ago, bamboo bridges connected the mainland of Navotas in Tanza and Sitio Isla Pulo, but was destroyed by a storm surge in the later part of 2013 and is now only accessible by boat. But, over the years, one can see the noticeable changes and improvements that somehow lightens up the spirit. Fewer garbage strewn on the beach, the waters of Manila Bay appear to be clearer and the lush mangrove in the Navotas Marine Tree Park have grown taller. Volunteering for exercises like the Asian Waterbird Census gives one a sense of pride. Letting the public know that places like Navotas exist with its bird species, contributes to the campaign of wetland conservation most especially in Metro Manila, where concrete jungles continue to sprout without sound urban planning. My bit of contribution in preserving Navotas as an important habitat for birds not only for the present but also for the appreciation of others in the future.

Consolidating data and listing of the waterbirds identified from both DENR and WBCP teams after the AWC was completed.