Nature has inspired artists for centuries.   As a birdwatcher I am often faced with very interesting subjects for my watercolour paintings while birding in forests,  wetlands or even right  from my very own gardens.  My camera becomes the best equipment to record sightings of attractive flowers, unusual plants or ancient trees.  Being surrounded by nature, one has to deal with the dilemma of choosing between watching birds or painting on the spot as an artist.   By choice, I still prefer a comfortable venue,   in the confines of my studio having photo references, instead of painting under the heat of the sun, or in a humid forest while being distracted by crawling critters!

Floral subjects to be painted can easily found in my very own garden.  Originally planning for a fragrance themed garden during my pre-birding days, I opted to grow Tea Roses, Camias, Chinese Magnolias, Jasmines and Gardenias. Somehow upon becoming a bird watcher I started to add Heliconias and Gumamelas for their bright colors and nectar to attract sunbirds. 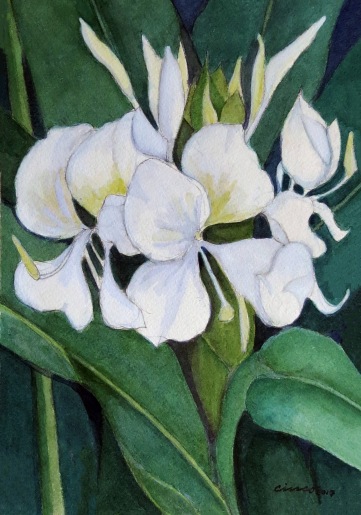 While on birding trips, I began to paint habitats associated with the birds.   Eventually, I was also influenced by plant loving birders to appreciate native plants found in the wilderness. From hollowed tree trunks where nesting birds tend their young, to the canopies that hornbills playfully perch upon,    or even to gardens as hovering sunbirds  taking their fill of nectar from  the colourful Heliconias. These became fascinating subjects waiting to be painted.

A symbiotic relationship exists between birds and flowers.  Birds act as pollinators and seed dispersers of plants.  While browsing through the internet, I have read that birds are attracted to brightly colored flowers.  Nectar-sipping birds tend to prefer  red colored fruits and flowers.   During a recent trip to Negros Occidental I saw the Magnificent Sunbird, an island endemic playfully lingering about the pink Torch Ginger Plant, as butterflies and the other sunbirds tend to favor  the Mali-Mali at Mambukal Hot Springs in Murcia. At  Gawahon Eco-park, Victorias City,  Olive-backed Sunbirds are easily visible by the cottages’ garden planted with ornamental banana plants.

Venturing into forests, trees and bamboo groves make fascinating subjects.  I visualize trees as similar to the architectural structure of buildings.  Trees have roots that keep them firmly grounded at the base,  and massive trunks  that lend support  to the  graceful directional lines of the branches  reach towards the sky.  Even the dainty lace-like leaves seem to frame its branches that defines the frame.   The Java Sparrows by a century old Acacia tree at the back of the family’s home in the province was a lifer during my early birding days.  A pair of these sparrows were   building a nest then inside a hollowed part in one of its massive trunks. 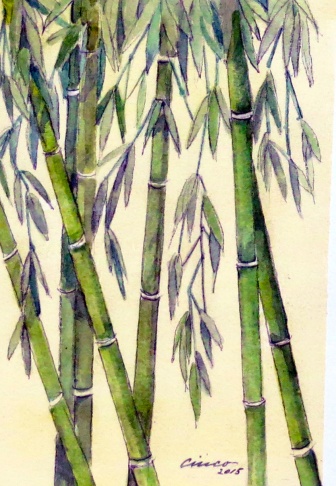 Bamboos are popular themes in both Chinese and Japanese paintings.  They are symbols of integrity, elegance and simplicity. Several years back, there was much excitement in the birding community when flocks of Green-faced Parrotfinches appeared in Bataan after a long period of absence. The Green-faced Parrotfinches were feeding on the very old and flowering bamboo thickets in Abucay, Bataan. As an interesting note, bamboos flower only every 60 to 100 years, signalling the end of its life, leaving room for younger bamboos to grow.

Mangrove forest on the fringes of the Tañon Strait at Bais, Negros Oriental

Mangroves along the coastal mudflats and riverbanks make challenging painting subjects.  From the mangroves’ intertwining roots, overlapping foliage, as vines and various plant life in the foreground  appear to be a very complex scenery.  The challenge then is how to simplify complex scenery to an uncluttered visual effect.  The mangrove forest of Bais reminds me of my first birding trip to Negros Oriental. While on the bamboo walkway constructed within the mangrove areas, I got overly excited sighting the Olive-backed Sunbird up close at eye level.  I also saw a pair of Philippine Ducks hiding amidst the thick vegetation along the coastline facing the Tañon Strait. On the other hand,  the mangroves done in sepia was set in the riverine forest adjacent to the Puerto Princesa Underground River.  The area added lifers to my list five years ago such as the Blue-headed Racket-tails and the Dark-throated Oriole while cruising down the river.

The first foreign festival I ever attended was the 5th Asian Bird Fair in Langkawi, Malaysia in 2014. There was an abundance of lavander water hyacinths at the wetlands when we birded close  to the Alia Hotel. At this birding site,  I had a chance to spot a Purple Swamphen, before the split of the Philippine Swamphen from its category.  Yes indeed, there was a marked difference!  The Purple Swamphen found in Langkawi had a more “blueish violet”  color compared to  the Philippine Swamphen, which had  a deeper shade of “purplish violet.”  I was attracted to  white water lilies  found at Irawan Eco-Park which I associated  my first sightings of the  Palawan Blue-Paradise Flycather perched atop a tree branch that shaded the pond.

My latest project involves creating a watercolour series on  floral portraits of Philippine native plants.  It has become a personal advocacy to raise awareness in identifying and propagating these plants of the country. Hopefully, with this crusade I will be able to convince others to veer away from collecting exotic plant varieties which are introduced and may eventually harm  the environment in the future.

I am very proud of the Bagawak tree in my garden, fondly called “Nueve de Febrero” by my mother, displaying numerous sprays of white flowers  around the month of February. Even the 30 year old mango tree provides shade from the sun, impressively flowering at the beginning of the year, yielding a lot of fruits during the summer. Most of the floral paintings in this article   were inspired by photographs posted by friends on social media  who  share a common passion for advocating Philippine native plants.

Watercolor painting is my means for expressing my creativity, thoughts and personal advocacies.   Using this water media requires endless hours of practice and self discipline.   Painting has imbibed the values of patience, perseverance and humility in learning from one’s own mistakes.   Using colors from nature’s palette becomes very therapeutic,   invoking an atmosphere of serenity, providing a calming effect in executing each  composition. Yes, there are still a lot of subjects to paint. I am fervently wishing for continued inspiration and the freedom to paint for many more years to come.

One thought on “Drawing Inspiration from Nature”