The Naujan Lake National Park is the fifth largest lake in the Philippines covering a total area of about 21,665 hectares declared by virtue of Proclamation No. 282 issued on March 27, 1956. The lake itself covers an area of about 8,098 hectares. It is located in the northeastern part of Mindoro Island and comprised of terrestrial and freshwater ecosystems bordering 21 barangays in the municipalities of Socorro, Pola, Naujan and Victoria in Oriental Mindoro province. This national park is a designated Wetland of International Importance to the Ramsar List on November 12, 1999 (Wetlands International, 2003) and is recognized as one of the Conservation Priority Areas, Important Bird Areas and Key Biodiversity Areas of the Philippines in various priority settings of the Biodiversity Management Bureau – Department of Environment and Natural Resources, together with several other organizations. In the study conducted in 2010 and 2011, there were 613 species of flora recorded, 24 species of mammals, 36 species of reptiles and around 120 species of birds. 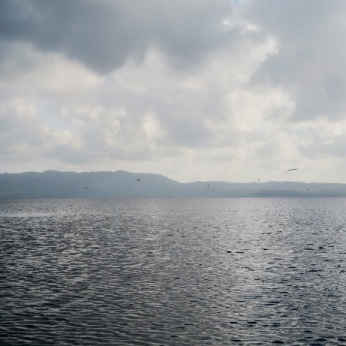 NLNP with Mt. Halcon in the background

Every year, the Protected Area Office of Naujan Lake National Park leads the conduct of Asian Waterbird Census and World Wetlands Day with assistance from the Biodiversity Management Bureau (BMB) of DENR, DENR CENRO Socorro, DENR MIMAROPA, academe in Mindoro and conservation NGOs like Mindoro Biodiversity Conservation Foundation Inc. (MBCFI) and Haribon Foundation. This year, Bob Natural, wildlife biologist of MBCFI and also a member of the Wild Bird Club of the Philippines (WBCP) assisted in the conduct of the said activities.

Being part of the East Asian Australasian, Asian Waterbird Census is annually conducted in Naujan Lake National Park. AWC aims to (1) to obtain information on an annual basis of waterbird populations at wetlands in the region during the non-breeding period of most species (January), as a basis for evaluation of sites and monitoring of populations, (2) to monitor on an annual basis the status and condition of wetlands, and (3) to encourage greater interest in waterbirds and wetlands amongst people, and thereby promote the conservation of wetlands and waterbirds in the region. 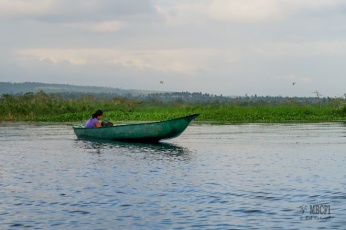 A local from Victoria fishing at NLNP using “bubo”, a type of fish cage

A total of 6,791 individuals consisted of twenty (20) species of waterbirds was counted during the AWC. Most abundant species with 4,833 individuals were the migrant Tufted Ducks (Aythya fuligula) followed by 1,351 individuals of Whiskered Terns (Chlidonias hybrida), also a migratory species. The other waterbird species recorded were Common Moorhen, Yellow Bittern, Cinnamon Bittern, Purple Heron, Javan Pond Heron, Great Egret, Intermediate Egret, Little Egret, Eastern Cattle Egret, Philippine Swamphen, Wandering Whistling Duck, Philippine Duck, Barred Rail, Black-headed Gull, Little Grebe, White-browed Crake, White-breasted Waterhen, Collared Kingfisher, Common Kingfisher, and Brahminy Kite. There is a noticeable drop in this year’s count compared to the 10,462 individuals consisted of twenty-three (23) species of waterbirds recorded in 2016. The cause of the decline is not yet clear but it could be caused by several factors including the unfavorable weather condition during the count. Also, the water level was still high during the count inundating low lying marsh and agricultural fields.

World Wetlands Day is an annual environmental event established to raise awareness about the importance and value of wetlands for humanity and the planet. It is held every 2nd of February, marking the date of the adoption of the Convention of Wetlands on February 2, 1971, in the Iranian city of Ramsar on the shores of Caspian Sea.

This year, World Wetlands Day in NLNP was celebrated with the theme “Wetlands for Disaster Risk Reduction”, highlighting the vital roles of wetlands in reducing impacts of extreme events such as typhoons, floods and droughts on communities, and in helping to build resilience.

Resource speakers from NLNP Protected Area Office, MBCFI, Haribon Foundation and DWCC presented lectures aboard the iBangklase, an educational shipboard project of DWCC and DENR primarily aimed to conserve Naujan Lake National Park through environmental education, eco-tourism development and public awareness campaign. Topics included vital information about Naujan Lake National Park and its biodiversity, Mindoro Biodiversity, Importance of wetlands in relation to disaster risk reduction, biodiversity as indicators, results of Asian Waterbird Census conducted in the past years, Wetland Youth Photo Contest guidelines and lecture about Basic Photography. While aboard the iBangklase, participants enjoyed birdwatching in the lake observing thousands of the migrant Tufted Ducks (Aythya fuligula) with an estimated count of 7,000 individuals along with other bird species.

MBCFI also facilitated an NLNP Photo Contest in relation to the year’s theme of World Wetlands Day aside from the Wetland Youth Photo Contest of Wetlands International. A faculty member from Mindoro State College of Agriculture and Technology (MINSCAT) won the NLNP Photo Contest and a DENR Regional Public Affairs Office (RPAO) Personnel came as runner up.

Winner of the NLNP Photo Contest 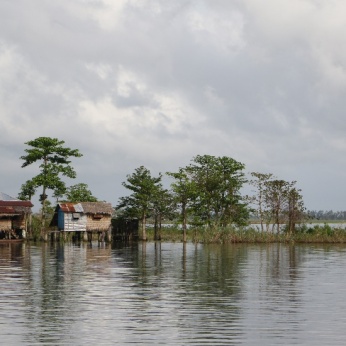 Runner-up of the NLNP Photo Contest