by Alex Tiongco and Teresa Cervero

The Philippines has on record 32 species of raptors:-

There were 2 important changes in the raptor classification in 2014/2015, based on the WBCP Checklist as of January 2015:-

East Asia has 2 major raptor migration flyway – the East Asian Continental Flyway and the East Asian Oceanic Flyway where the Philippines is an important hub.

Raptor migration in the Oceanic Flyway involves vast sea crossings and is influenced greatly by monsoon winds: the Northeast Monsoon affecting the Spring migration (March and April) and the Southwest Monsoon involving Autumn migration (September and October). However, the many typhoons which occur during migration seasons could also exert tremendous but yet largely unknown effect on the flight and plight of migrating raptors.

Every year, thousands of raptors come to winter in the Philippines or simply pass through, but their species, numbers, routes and migration ecology have not been systematically studied.

Up until recently, raptor migration watch was non-existent in the Philippines. In 2004 a raptor migration flight path was discovered at Tanay on southern Luzon which became the habitual raptor watch site for the Wild Bird Club of the Philippines. Occasional spring and autumn watches conducted there produced great records and flight information spurring a small group of members of the club, with the assistance of the ARRCN, and neighbouring countries, Malaysia, Thailand, Taiwan and Indonesia to take up the challenge for structured studies on Raptor Migration.

A series of field work over the last 3 years have been undertaken in other areas around the Philippines to determine:

1) the exit, entry and obligatory converging points migratory raptors use,
2) the routes they take in their journey over the various islands in the Philippines,
3) the wintering and roosting places.

The original objective of the WBCP Raptor Group was simply to establish a data base regarding species, numbers, routes, habitats of migrating raptors.

Studies were conducted at the following sites:

Many other sites were investigated which need further and longer observations.

Additionally, raptor sighting reports from club members are regularly harvested to form part of the overall information regarding presence and movement of raptors in the Philippines.

Vital discoveries have been made and significant data obtained which could help form an overall picture on the raptor migration phenomenon in the Philippines:

The results of the month long studies at Batulaki and Cross at Sarangani (Autumn 2014) and Cape San Agustin, Davao Oriental, (Autumn 2013) were published at BirdingAsia, no.24, December 2015. This study confirms the passage of  thousands of Chinese Sparrowhawks through Cape San Agustin, on Davao Oriental and Cross, Glan on Sarangani  from September-October enroute to Indonesia.  The migratory raptors presumably cross the seas through the Sarangani Strait.

The results of the first ever full season migration watch conducted at Pancian, Pagudpud, Ilocos Norte (Spring 2015) which have just been published at eBon.

At the 9th ARRCN Raptor Symposium at Chumphon, members of the club and the Philippine Eagle Foundation PEF made 6 paper and poster presentations on Philippine Raptors which was so far the biggest representation in any ARRCN Raptor symposium.

As the studies progressed and information flowed in, it was realized that a small group of hobbyists running around the breadth and depth of the country could not sustain the project’s viability.

The upsurge of information and the immensity of information still to be obtained and the depth of its analysis require that more people be engaged. It was decided to encourage students and communities along the discovered flyways to be involved to carry on the studies.

Northern Luzon, The current area of study for spring migration

Northern Luzon has been known to be the jump off area for raptors leaving for their breeding areas in the Palearctic (Japan, China, etc) for spring (March, April).

The group’s early forays to the north resulted in the following initial discoveries:-

1)      An important spring roosting area for Grey-faced Buzzards at Sanchez Mira, Cagayan Valley. (2013). Roosting areas are considered extremely important in raptor studies as they hold the secrets behind the species phenology.

With these important discoveries the Raptor Group and the ARRCN decided to concentrate their resources and manpower in the northern areas of the Philippines for the spring season in order to pinpoint areas where these raptors can best be monitored and studied. But the more important aim is to encourage schools and universities and the LGUs to incorporate raptor studies into their continuing research and conservation programs.

In line with this spring program, yearly, for the last 3 years, seminars have been conducted by the ARRCN and the Raptor Group at Sanchez Mira, Adams, Pancian and Laoag. Fliers on raptor migration, educational materials, monitoring equipment (binoculars and spotting scopes) have been regularly distributed to the communities and the universities from personal donations from club members, the ARRCN and its sponsors.

Fliers and educational materials were distributed to students and communities in Northern Luzon; talks & slide/film presentations were done at the Northwestern University-Laoag and the Cagayan State University – Sanchez Mira campus.

Various educational & awareness raising activities were conducted by the WBCP-Raptor Group in Ilocos Norte & Cagayan Province since 2013; as well as exploratory trips in the quest for the raptor migration route. 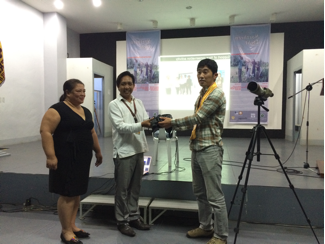 This year, the Cagayan State University- Sanchez Mira  and the Northwestern University of Laoag have agreed to take on the challenge; so have the communities of Pagudpud and Adams. More communities and groups are slated to join next year’s (2017) projects.

1)      Conservation forum held at CSU attended by students, the LGU and the DENR on March 21, 2016 facilitated by Dr. Carmela Espanola. Prior to the forum, talks were done by Trinket Canlas, Toru Yamazaki, Michael Calaramo, Forester Florendo Serra and the special guest speaker — Executive Director of the Philippine Eagle Foundation, Dennis Salvador.

2)      First  roosting density count on the Greyfaced Buzzard was conducted by students of CSU Sanchez in cooperation with the ARRCN and the WBCP Raptor group 12March- 15April.

3)      Dr. Lala Espanola and Jelaine Gan (U.P. Institute of Biology) in cooperation with CSU-Sanchez Mira and the ARRCN, have completed their field research on “Prey composition, population density and the hunting of migratory Grey-faced Buzzards in Sanchez Mira”.

With the first ever roosting density study, Cagayan State University incorporated the Raptor Study program into their Education Extension Program. The University will continue to conduct yearly density counts on the roosting sites, and conduct studies in furtherance to the project started by Dr. Lala and Jelaine to determine the beneficial effect of the seasonal presence of roosting raptors to coconut plantations and rice fields of northern Luzon.

Dr. Carmela Espanola and Jelaine Gan at their study site in Sanchez Mira.

Meeting with Mayor Ansela Sacramed of Sanchez Mira, prior to the Conservation forum held at the Cagayan State University on 21 March 2016. 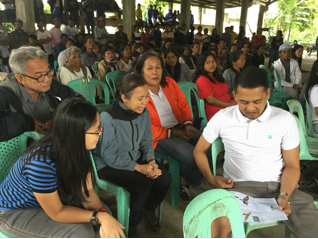 With the Mayor of Pamplona – Aaron Sampaga – during a General Assembly in Brgy Nagattatan: discussing raptor migration and the importance of raptors in the environment as indicators of
the health of the environment; as well as benefits derived by the farmers in protecting the Grey-faced Buzzard. 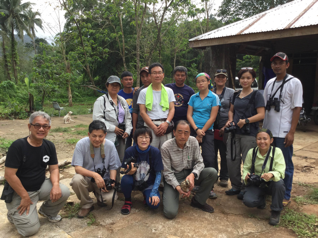 A sombre picture of the ARRCN, WBCP members and CSU personnel at the old CSU site in Sanchez Mira, prior to the release of an injured Grey-faced Buzzard. 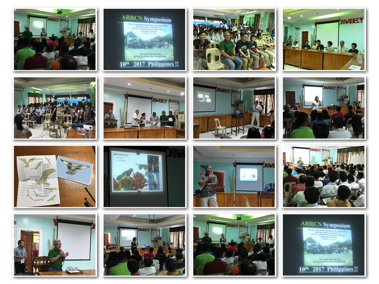 The watch site in Pagudpud – located at the Pannzian Beach & Mountain Resort, overlooking the Kalbario-Patapat Ranges. In photo: Michael Calaramo and his team, with Raptor group members and Chary Dino & crew doing a documentary shoot.

Perched and roosting Grey-faced Buzzards where easily seen from a distance in the open fields and foothills of Patapat mountains in the afternoons, during the peak migration period last March.

Raptor migration monitoring at Pannzian Resort’s ecopark, conducted by the NWU team led by Michael Calaramo and WBCP members from 12 March to 30 April, 2016 (including a visit to a possible watch site at
Adams on 19 March with ARRCN). 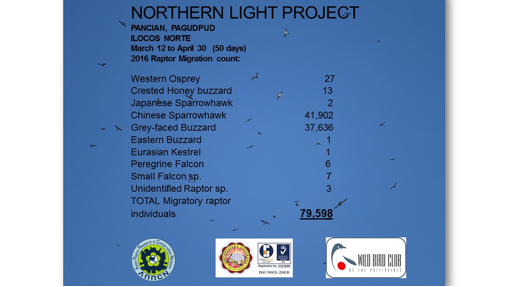 The ARRCN and the Raptor Group intends to continue the monitoring studies at Cape San Agustin, Davao Oriental and at Cross, Glan, Sarangani which were started in 2013 and 2014 respectively. The Philippine Eagle Foundation has agreed to have a major involvement of the project, which is very convenient indeed because the distance between the two watch sites involves more than 12 hours travel each way.

The Autumn watches on Mindanao will be patterned after the Northern Light project in Northern Philippines which is empowering the local communities and Universities to be the movers of the studies.

We still have to determine which Universities would like to commit to Project Southern Cross .

The Governor of Sarangani who supported the 2014 watch at Barangay Cross has pledged greater support for the 2016 Autumn raptor migration watch.

Details of the project will be announced when finalized.

The Cagayan State University, in coordination with the ARRCN, the LGUs of Sanchez Mira, MASCOOP – a Farmers cooperative with memberships covering the area from Claveria to Tuguegarao are planning to hold an educational campaign for the protection of the Greyfaced Buzzards. The LGU’s of nearby municipalities like Claveria and Pamplona will be invited to take part. The campaign is slated to start in late January, a month before the migration season.

The educational campaign will be capped with a Raptorwatch Festival held in the campus of Cagayan State University which is directly under the flyway.

The Northwestern University research team will spearhead the monitoring for 2016. Since the campus of NWU is about 2 hours away from the watch site, the team will utilise students from the schools of Barangays Pasaleng, Pancian and Balaoi as part of the educational program to foster the awareness of raptors to students and the community.

The search for major roosting, and nesting sites in the vicinity of Adams and Mt. Palemlem will continue.

We are optimistic the educational campaign and raptor migration monitoring studies which have been conducted in the past 3 years and the continuance of the “Northern Light” project will not only promote increased awareness of the richness of the environment and basic understanding of the ecosystem but instil the love for our natural heritage in the hearts of the community members.  Then, perhaps, the conservation efforts will reap benefits for everyone.

Our heartfelt thanks goes out to all those who watched with us and have assisted us in so many ways: