Compiled and edited by Rob Hutchinson and Maia Tañedo

Summarized in this article are records collected by the WBCP Records Committee and Rarities Committee that cover the period from April 2014 to March 2015.

From April 2014 to March 2015, there have been three new country records for the Philippines. An adult Franklin’s Gull Leucophaeus pipixcan in breeding plumage was seen at Bucana Beach in Davao del Norte, Mindanao on 12 April 2014 (PS).  A 1st year Amur Falcon Falco amurensis was seen at San Juan, La Union, Luzon on 01 November 2014 (RO) and a 1st year Saunders’s Gull Chroicocephalus saundersi was found at Santo Tomas, La Union, Luzon on 09 January 2015 and relocated nearby on 01-02 February 2015 (RH, ID).

A male Baer’s Pochard Aythya baeri was a popular attraction at Candaba Marsh, Pampanga, Luzon from 31 January – 12 February 2015 (MK, RH, ID), only the fifth record in the country and the first since 2003.

Pelagic species recorded were one Bulwer’s Petrel Bulweria bulwerii between Itbayat and Batan, Batanes, Luzon 01 May 2014 (RW) and another was at Jessie Beazley Reef, Palawan on 11 May 2014 (JCG, GJ, AJ). A Red-tailed Tropicbird Phaethon rubricauda was in the Tanon Straits, Central Visayas on 05 June 2014 (KP) and a White-tailed Tropicbird Phaethon lepturus was at Tubbataha Reef, Palawan on 29 June 2014 (BQ). A Parasitic Jaeger Stercorarius parasiticus was in the Babuyan Islands, Cagayan, Luzon on 02 April 2014 (SN).

Two satellite-tagged Little Curlew Numenius minutus were logged passing though the Philippines with one individual stopping in Misamis Occidental, Mindanao from 24 April onwards, then in Quezon, Luzon from 03–04 May 2014. The other was on Mapun Island, Tawi-Tawi on at least 12 June 2014, and on Palawan on at least 15 June 2014 (IV), then another untagged individual was on Semirara Island, Antique on 16 June 2014 (JI).

A Short-eared Owl Asio flammeus was reported on Pag-asa Island, Palawan on 26 February 2015 (BQ). The migratory leucogenis form of Ashy Drongo Dicrurus leucophaeus, a rare visitor to the Philippines, was seen at Tanay Rainforest Camp, Rizal on 15 January 2015 (MLT, JJ) and at the University of the Philippines Diliman Campus, Metro Manila on 31 January 2015 (BM).

An Asian House Martin Delichon dasypus was at Mantakil, Negros Oriental on 16 February 2015 (MK, CP, ID, TR, SR) and is the 3rd winter running that they have been recorded at this location. One Yellow-browed Warbler Phylloscopus inornatus was at Bay-yo, Mountain Province, Luzon on 23 January 2015 (DLV) with another heard a few kilometres away on 10 February 2015 (RH / Birdtour Asia). An exceptional flock of twenty Common Starling Sturnus vulgaris was at Laoag, Ilocos Norte, Luzon on 17 – 23 December 2014 (RR) although unconfirmed reports suggest that up to 100 may have been present in the area. This is just the fourth country record for this species in the Philippines. 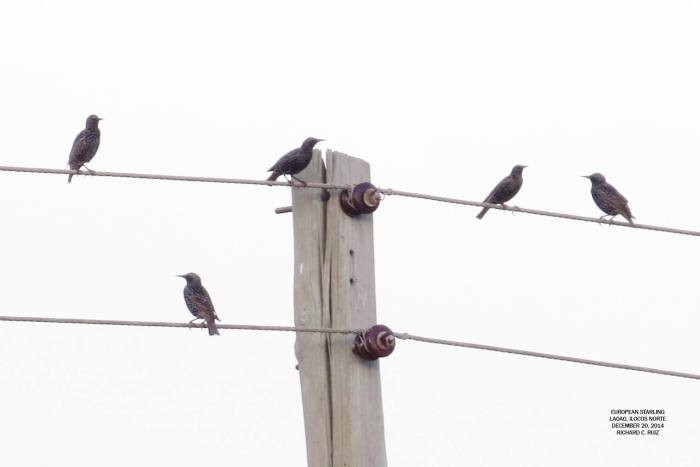 Palawan had two records of Dark-sided Flycatcher Muscicapa sibirica, one at Puerto Princesa City on 25 October 2014 (CBG) and another near Sabang on 16 – 17 February 2015 (RH / Birdtour Asia). A 2nd year Stejneger’s Stonechat Saxicola stejnegeri on Itbayat, Batanes, Luzon on 30 April 2014 was just the third to be positively identified. Two Forest Wagtails Dendronanthus indicus at Calapan, Mindoro Oriental on 20 September 2014 were the first island records (DT). A Richard’s Pipit Anthus richardi on Pag-asa Island, Palawan was just the second record and came just over four months after the first. A Brambling Fringilla montifringilla was at Bato, Camarines Sur on 09 December 2014 (MAV), a Little Bunting Emberiza pusilla was at Mount Polis, Mountain Province, Luzon on 11 February 2015 (AC) and a Yellow-breasted Bunting Emberiza aureola was on Itbayat, Batanes, Luzon on 01 May 2014 (RW) was the second country record and the first for this century.

Among resident endemics, the highlights were large numbers of Green-faced Parrotfinches Erythrura viridifacies at Letran, Bataan, Luzon during January and February, with at least 1250 there on 12 February 2015 (AE, RH / Birdtour Asia). At least 3 Naked-faced Spiderhunters were at the Tanay Rainforest Camp, Rizal, Luzon on 15 January 2015 (JJ, MLT)

A couple of hard to find migrants were seen at La Mesa Ecopark. A Ferruginous Flycatcher Muscicapa ferruginea and a possible Northern Boobook Ninox japonica were seen on 1 November 2014 (AB).

Another sighting of a possible Northern Boobook Ninox japonica was reported earlier in New Manila, Quezon City, Luzon on 23 September 2014 (PT). These two Boobook sightings are recorded as “probable” Northern Boobooks because they cannot be positively told apart from Chocolate Boobook due to identification difficulties.