They’re back! The Spotted Imperial Pigeons are easy to view and photograph only once a year when they leave the forest and head for the shores of Pasuquin, Ilocos Norte. Laoag-based WBCP members Richard Ruiz and Petrus Calope have been monitoring their movement since 2011. This year Richard Ruiz posted pictures of the Spotted Imperial Pigeons on April 29. That means it’s time to head to Ilocos Norte! This is a reprint of an article that first came out in GMA News Online on 11 June 2014.

Unknown to many Filipinos, a mysterious annual ritual takes place between May and August every year along the rocky shoreline of Pasuquin, Ilocos Norte: this is the time that a Philippine endemic bird called “Barog,” or the Spotted Imperial Pigeon (Ducula carola), leaves the relative safety of the forest to fly down and congregate in the coast.
No one knows why they do this.
The Spotted Imperial Pigeon is recorded only in Luzon, Mindoro, Sibuyan, Negros, Siquijor and Mindanao. However, recent data suggest that its populations in Sibuyan, Mindoro and Siquijor may have already been wiped out by a combination of habitat loss and indiscriminate hunting. It is also alarming to note that the bird’s remaining populations on the other islands, as experts have observed, are already on a downward spiral.
Dwindling populations
The Spotted Imperial Pigeon is classified by both the global nature-conservation group IUCN and the Department of Environment and Natural Resources as “Vulnerable,” meaning it is facing a high risk of extinction in the wild if nothing is done to address its worrying population decline.
Estimates compiled by BirdLife International put the pigeon’s global population at about 3,500 to 15,000 individuals. Records maintained by the Wild Bird Club of the Philippines show that recent sightings of this species have been confined to Luzon, specifically Pasuquin, and those sightings are for flocks numbering just a few dozen individuals at most. 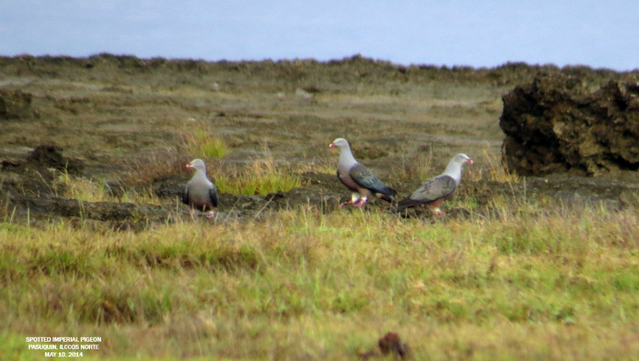 Petrus Calope and Richard Ruiz, both Ilocos Norte-based birdwatchers, are spearheading a grassroots campaign to raise awareness about the plight of the Spotted Imperial Pigeon and to establish a sanctuary for the species. On June 3, they led a group of birdwatchers from the WBCP and representatives from the local government units and the DENR to witness the annual return of the pigeons to Pasuquin’s shoreline.
Ilocos Norte is fortunate to have what could be the last few remaining populations of Spotted Imperial Pigeons, Calope told the group. It should be a source of pride for Ilocos Norte to harbor this bird, which is found only in the Philippines and nowhere else in the world, he said.
An annual mystery
Ruiz, who has been monitoring the annual return of the pigeons to Pasuquin’s shoreline since 2011, says the seasonal movement may be a way for the birds to “socialize.” Other theories suggest the pigeons fly down to the coast to ingest calcium and other nutrients that are needed to strengthen their egg shells. Others say the birds travel to the coast to drink or bathe in salt water.
Whatever the reason, there is something in Pasuquin’s rocky coastline that is vital to the life cycle of these birds, making them come back year after year, Calope said.
“Why do the Spotted Imperial Pigeons choose Pasuquin? Why the seasonal congregations have not been observed in other shorelines of the country is the mystery that needs to be solved to be effective in saving these special pigeons with a mysterious annual ritual,” Calope said.

Tourism potential
This annual event presents a unique opportunity for conservationists to learn more about this mysterious species and for the provincial leadership to consider establishing a wildlife sanctuary where the birds would be protected, Calope said.
If the local government units, with the help of the DENR and the scientific community, could agree on ways to protect the Spotted Imperial Pigeon and its habitats, its annual return to Pasuquin could become an eco-tourism attraction for Ilocos Norte and a seasonal source of added income for local residents, Calope said.
But more than its eco-tourism appeal, it is our responsibility to protect this native bird to ensure that it will still be there for future generations to see, Calope said. — TJD, GMA News

Mads Bajarias is a founding member of the Wild Bird Club of the Philippines, a nonprofit group that seeks to protect Philippine birds and their habitats. The club can also be found on Facebook. The opinions expressed in this contributed article are those of the author and do not necessarily reflect the views of GMA News Online.