I’ve done a fair bit of birding around the Philippines and like many WBCP members I keep a Philippines list. That list is not up to date and I don’t lose sleep over the many gaps. For some years now I consider myself a Mindanao birder rather than a Philippines birder, the size of my home island and the gaps in my list here are more manageable. I’ve added a few vagrants over the last year but I can’t remember the last time I saw a new Philippine endemic bird on Mindanao.  Of the five long standing gaps on my list, three are on my local patch. I have heard Bagobo Babbler and Mindanao Brown Dove on Mount Talomo but they remain unseen to me. Number three, Mindanao Lorikeet, is up the same mountain. I know that because trappers manage to find them, but I never have. I have heard number four, Mindanao Bleedingheart, on two occasions at PICOP but again it remains never seen.  I had planned on two previous occasions go for number five by visiting Mount Pasian in Eastern Mindanao.  It is the only site birders have ever seen Lina’s Sunbird, but it is hard work and few birders have ventured there. From Trento on the way to Bislig it is a two hour ride on the back of a motorbike to reach the site. My planned 2013 trip was cancelled the day before due to a typhoon and my planned 2014 trip was cancelled due to security issues in the area. Since the second cancelled trip I decided a new tactic was required for this blocker, in the form of a new site.

When I am not birding in the field I spend a lot of time looking on Google Earth. Some time ago I found a road that appears to reach over 1300masl in Compostela Valley, the southern edge of the tiny range of Lina’s Sunbird. Could that be possible, to see Lina’s from the car?

It took until 16th March this year to find out, when I loaded the car for an expedition and set off with fellow birder Brendan Sloan. The drive from Davao was longer than expected as we negotiated closed bridges and roads than no longer exist. That meant it was nearly mid-day before we arrived at the target area. The forest was not as depicted on Google Earth, the squatters, loggers and now charcoalers have been busy there.

We had mixed flocks at the first two stops. Mostly Mountain White-eye but McGregor’s Cuckooshrike and this diuatae subspecies of Olive-capped Flowerpecker were interesting records. 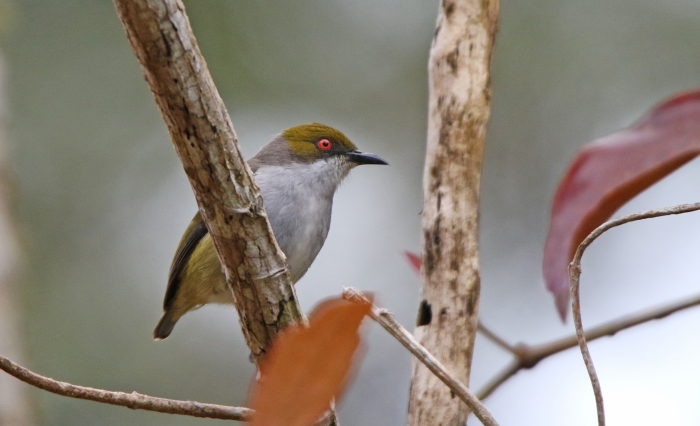 It was our third stop at a good altitude when Brendan got on to a female Sunbird. It looked good for Lina’s with a little red on the belly rather than on the chest as with Metallic-winged. I got a record shot but there are none published to compare it with.

Next up was the male. More distant but perched up and singing. We checked the tail, it was not Metallic-winged which has almost no tail, this bird had a Fan-tail tail!

So there you have it. Lina’s Sunbird, seldom seen Philippine endemic, range-restricted to mountains of Eastern Mindanao, from the car, or at least within meters of the car.

This is my car at the site of Lina’s Sunbird. You may think that Brendan’s attire is a reflection of how easy the birding was that day, but Brendan famously wore the same clothes on the walk in to Hamut camp. I am not pictured but was also in shorts and a vest. Again this is not a reflection of how easy the birding was but because we wanted to make absolutely sure we could not be mistaken as army by the NPA or as NPA by the army. That the area is not completely safe is the reason I will not be making site details public right now, but I am working with local government and DOT in the hope that arrangements can be made for safe visits in future.

We celebrated the Lina’s and took the car photo in little more than an hour at the site. We were preparing to leave when Brendan picked up a Brown Dove. It was close, perched silently and at eye-level but in deep shadow and silhouetted. At first sight it was not immediately obvious if it was a White-eared Brown Dove or Amethyst Brown Dove, usually easily distinguished on size and shape. That this was between the sizes of those two species and had a similarly middling tail length was the first clue as to its identity. The bird appeared to be adult but lacked white on the face and showed dark skin around the eye. The identification was clinched when it flew over us, perched hidden and high, and called repeatedly, the short accelerating call “similar to the sound of a ball bouncing and finally coming to rest”.

Mindanao Brown Dove. Blocker number two for the day. In less than two hours of birding. Next to the car.

Again, not many photos of this species in circulation to make comparison.

I hope others will be able to visit this site in future for these two Philippine megas, but for now I have some work to do on Google Earth looking for an accessible Lorikeet site.

2 thoughts on “Bird Photos of the Month: Mindanao Brown Dove and Lina’s Sunbird”