WBCP signed a formal agreement with the DENR-BMB to work for the protection and conservation of birds and their habitats. WBPC President Gina Mapua calls on WBCP members to help by working on the ethics and protocol of birdwatching and bird photography, coordinating with the BMB on their rehabilitation and release projects, and helping out with their upcoming biodiversity conservation and awareness-raising projects.

Last November 10, the WBCP formalized our long-standing relationship with the Biodiversity Management Bureau of the DENR in a memoradum of agreement. There to witness and record the event were Gina Mapua, Tinggay Cinco and Jon Javier as members of the Execom, was well as Fredd Ochavo, Carmela Balcazar, Ixi and Mikeli Mapua. 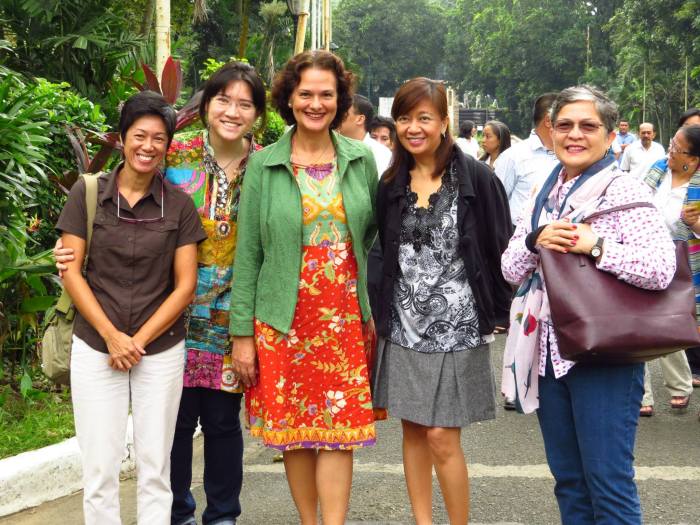 What does this memorandum of agreement involve? Happily, many of the directions in which the club is already active or is eager to enter in order to protect and conserve our beloved wild birds and their habitats. Formally, the MoU is entitled, “DENR-BMB and WBCP Partnership Program for the Protection and Conservation of Philippine Wild Birds and Their Habitats.

Our first objective is to promote the values of Philippine wild birds and the environment through well-organized bird watching activities as well as the celebration of bird festivals and other events that feature Philippine birds and their habitats. A second objective is to maintain and update records of occurrences and distribution of Philippine wild birds, especially those in need of immediate conservation and management interventions. And lastly, the two agencies will cooperate in the replenishment and/or re-establishment of native threatened avian species through rehabilitation and release projects.

Listed as obligations of the DENR-BMB are the development of ethics, standards and protocol on birdwatching and wild bird photography; development of bird rehabilitation and release projects for joint implementation; the seeking of WBCP’s clearance prior to the use/production of any bird photographs taken by its members;  and the DENR’s support of our Philippine bird festivals as co-organizers and participants.

In turn, WBCP’s obligations are to submit a list of bona fide WBCP members for record and reference purposes; assist the DENR-BMB in the development of standards and protocol on birdwatching and bird photography; assist in the yearly Asian Waterbird Census in areas identified by the club; organize birdwatching events for the DENR-BMB; sustain migratory raptor monitoring in coordination with concerned DENR field offices; provide the DENR-BMB with updated bird records (including photographs if possible); assist the DENR-BMB in their rehabilitation-and-release projects; and support the DENR-BMB’s biodiversity conservation advocacies and awareness-raising projects.

This memorandum of agreement remains in force for five (5) years, unless terminated by either of the parties.

Am sure many of our members will find certain points in the objectives and obligations of this memorandum of agreement  particularly stimulating. Since this club runs purely on volunteer power, I urge members to come forward and volunteer for the obligations that stir up their passions.

Who would like to work on the ethics and protocol of birdwatching and bird photography? Last June 28, at the first wildlife enforcement orientation held in Jops Josef’s place, some members questioned Josie de Leon, OIC-Chief of the Wildlife Resources Division of the DENR-BMB, about this issue. Her answers were spot on. I suppose the bureau already has a basic document on this matter. All we probably need to do is sit down together and finalize that document.

Who wants to coordinate with the BMB on their rehabilitation and release projects? A visit to the “zoo”at the Ninoy Aquino Park was quite an eye-opener. While the facility was clean and the birds were kept reasonably well, it was distressing to see so many birds in captivity.  While we were wandering about, we were advised not to go into a certain area. Why? Certain birds were being readied for release. Good news!

Who wants to help out with their biodiversity conservation and awareness-raising projects? One upcoming project is developing in the University of the Philippines in the wake of the killing of a black bittern. And many more mini and major events are developing over the horizon. Exciting!

Who wants to add their support to the club’s hardworking raptor team?Am sure Alex T and Tere C will be glad for more members to join their ranks.

Am so grateful and happy we have this formal agreement with the DENR-BMB. Now we can get cracking on some very important matters and ensure we get the hoped-for results. May the next five years see more rewarding results in our efforts to protect and conserve our Philippine wild birds!

Let’s go and protect the birds! Photo by Jon Javier.