This is the highly anticipated continuation of Christian Perez’s series of articles on the major publications on Philippine birds throughout the years. This second part covers the remainder of the 18th century.

Part 1 of this series of articles reviewed the ground-breaking works of Kamel, Brisson and Sonnerat. This second part will cover the remainder of the 18th century and the age of enlightenment. Linnaeus deserves a place of choice for inventing taxonomy. Buffon was also a major naturalist of his time and would be a reference in ornithology for the next century. Some of the publications focused on bird illustrations, some of which are attractive and highly valued to this day. Others focused of the systematic classification of known birds. None of the authors reviewed here actually travelled around the world. They were just describing birds from existing skin collections, or in some cases compiling information from earlier sources.

Carl Linnaeus (1707–1778), also known as Carl von Linné, was a Swedish botanist, physician, and zoologist. He introduced the biological naming system of binomial nomenclature and is considered the father of modern taxonomy. He formulated his scheme in his book Systema Naturae, which was first published in 1735 and subsequently went through many editions until after his death in 1778. All were written in Latin. The 1735 first edition can be read online here and the 1766 12th edition here.

The binomial nomenclature is a formal system of naming species of living things by giving them a name composed of two parts using Latin grammatical forms. Such a name is called a binomial name or a scientific name. The first part of the name identifies the genus to which the species belongs and the second part the species within the genus. The binomial name is written in italics and the genus name (the first part of the name) with a capital initial letter. The binomial name is followed by the name of the person who first named the species or subspecies and the year it was named. The name of the author remains attached to the species even if the genus name has changed because of taxonomic rearrangements, or if the subspecies was elevated to full species. The author’s name is sometimes abbreviated, for instance Linn. for Linnaeus. As an example the full scientific name of Balicassiao, a bird first named by Linnaeus, is Dicrurus balicassius Linn. 1766.

Of the 672 species listed in the WBCP 2013 Checklist of Birds of the Philippines, 97 were named by Linnaeus, mostly in the 1758 and 1766 editions of Systema Naturae. To give an idea of the magnitude of Linnaeus taxonomic achievements, here is a partial list of the Philippine birds he named (with the endemic or near endemic species in bold characters). It is a long list but I think it is worth showing it. Linnaeus was a giant. 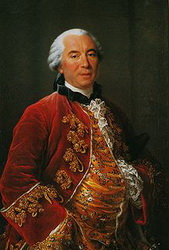 eorges-Louis Leclerc, Comte de Buffon, known as Buffon (1707–1788) was a French naturalist, mathematician, cosmologist, and encyclopedist. He published a 36-volume Histoire Naturelle (Natural History) in Paris that went through several editions in different sizes and formats, one of which included 18 volumes about birds from 1770 to 1785 that can be read here. Buffon did not attach much importance to naming the birds and did not provide scientific names according to the Linnaean system. With regard to Philippine birds Buffon repeated some of the descriptions of Brisson and Sonnerat, and even copied some of their mistakes in listing birds that do not occur in the Philippines. The new Philippine species not listed by Brisson or Sonnerat are Hooded Pitta, Pied Bush Chat, Black-naped Monarch, Luzon Flameback, Luzon Hornbill and Little Grebe.

The best-known edition is a large folio 10-volume “Histoire Naturelle des Oiseaux” (Natural History of Birds) published from 1770 to 1786. It contained 1008 originally hand-colored copper plate engravings created by the foremost bird artist of the day, Francois Nicolas Martinet. Of the 1008 plates, 31 represent Philippine birds. These attractive prints are sought after by collectors and go for $100-300 on the antique market depending on the condition and the type of bird. Believe it or not, a complete original 10-volume set is currently on the market for $250,000 (details here as long as it is not sold). The entire work can be read online here. The illustrations below are from that edition.

In some of the illustrations the color and pose of the birds is different from those of the birds we know today. It should be remembered that Buffon, like the other authors of his time, was studying skins that had been gathered months and even years earlier, and had been kept in warm ship holds during the journey back and in storage in collections in Europe. The feathers, bills and legs might have been damaged, discolored or soiled, and the eyes not preserved. Also the artists were trying to represent a perched bird from a dead skin, leaving much room to their imagination. In 1783 Dutch naturalist Pieter Boddaert (1730-1795) published in Utrecht a list of the 1008 birds illustrated by Buffon and Martinet and provided scientific names. The list can be seen here. Taking into account the rules of nomenclature, Boddaert is credited for naming those birds. He named 12 of the 672 birds in the WBCP 2013 Checklist including Visayan Hornbill, Luzon Hornbill, Philippine Magpie-Robin, Bar-bellied Cuckooshrike and Black-naped Monarch.

Denis Diderot (1713-1784) was a French philosopher and encyclopedist. He was a major figure of the age of enlightenment and the chief editor of “L’Encyclopédie” which was completed in 1772 and proposed to document all human knowledge of the time. This of course covered natural history including birds but did not provide information that had not been published before. Diderot’s bird illustrations are not particularly attractive as five birds or more were usually packed in one page and the engraving quality is not at par with Buffon’s, as can be seen in the example below.

Philipp Müller (1725–1776) was a German zoologist. He published in Nuremberg in 1776 a supplement to Linnaeus’ Systema Naturae that contained the first scientific classification for a number of species but without illustrations (read the book here). An example of a Philippine bird named by Müller is the Philippine Cockatoo Cacatua haematuropygia Müller 1776. Other Philippine birds he named include Colasisi, Coppersmith Barbet and Hooded Pitta. 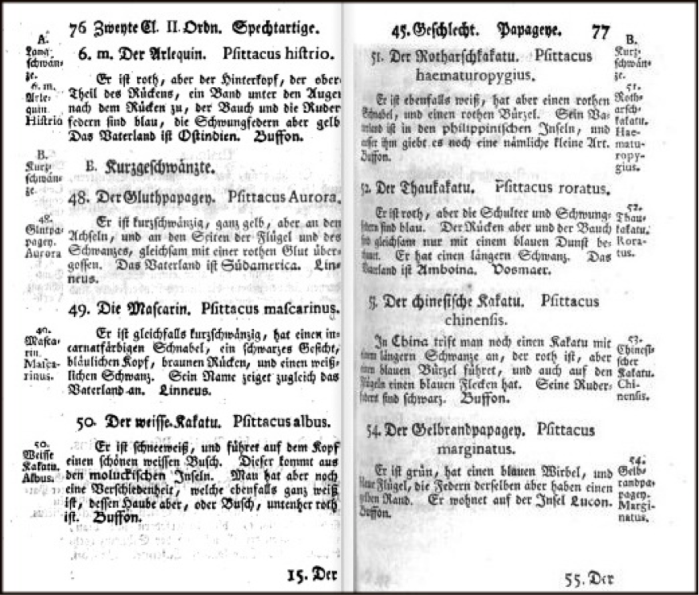 n Latham (1740–1837) was an English physician and naturalist. He published “A General Synopsis of Birds” in London in 1781 where he described many new species he discovered in various museums and collections. Like Sonnerat and Buffon, he did not provide scientific names for the new birds he described. The book can be read here. With regard to Philippine birds, Latham mainly repeats Brisson, Sonnerat and Buffon including their mistakes. The only Philippine bird illustrated is the Buff-banded Rail, that he calls Philippine Rail. He republished some of his work later, this time providing scientific names to newly described birds. In 1795 Latham published Faunula Indica (Fauna of India) in collaboration with German naturalist Johann Forster, who formally named the Philippine Bulbul Hypsipetes philippinus Forster 1795. 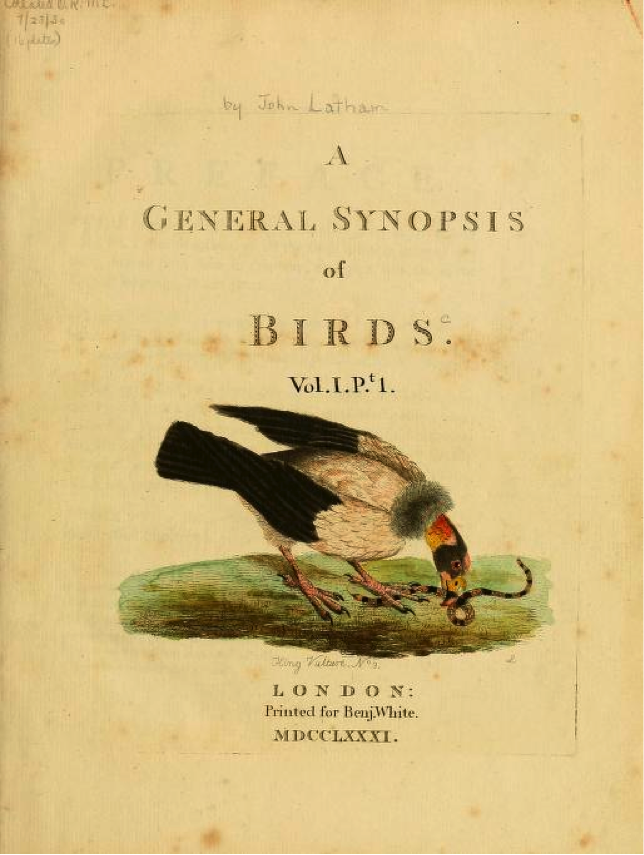 Title page of Latham’s A General Synopsis of Birds (1781)

nni Scopoli (1723—1788) was an Austrian physician and naturalist. Although they never met, Scopoli and Linnaeus corresponded frequently on natural history topics. He published Deliciae Florae et Faunae Insubricae in Ticino (Tessin), Switzerland from 1786 to 1788, where he named some birds that had been described by Pierre Sonnerat. Volume II of this work can be read online here. An example of a Philippine bird named by Scopoli is the Luzon Bleeding-heart Gallicolumba luzonica Scop. 1786.

Bernhard Otto (1745-1835) was a German doctor and naturalist. He translated Buffon’s work in German and published it in Berlin in 1788 with additional notes and illustrations under the title “Naturgeschichte der Vögel” (Natural History of Birds). He may not be an important author, but the book contains an interesting illustration of “Der blaue philippinische Fliegenschnapper”, literally Blue Philippine Flycatcher, now known as Black-naped Monarch. Johann Friedrich Gmelin (1748–1804) was a German naturalist, botanist, entomologist and herpetologist. He published the 13th edition of Linnaeus’ Systema Naturae in Leipzig, Germany from 1788 to 1793 where he gave scientific names to birds previously described but not named by Sonnerat, Buffon or Latham, following the Linnaean system. The book can be read here. The well-known tree genus Gmelina was named after Gmelin by Linnaeus. 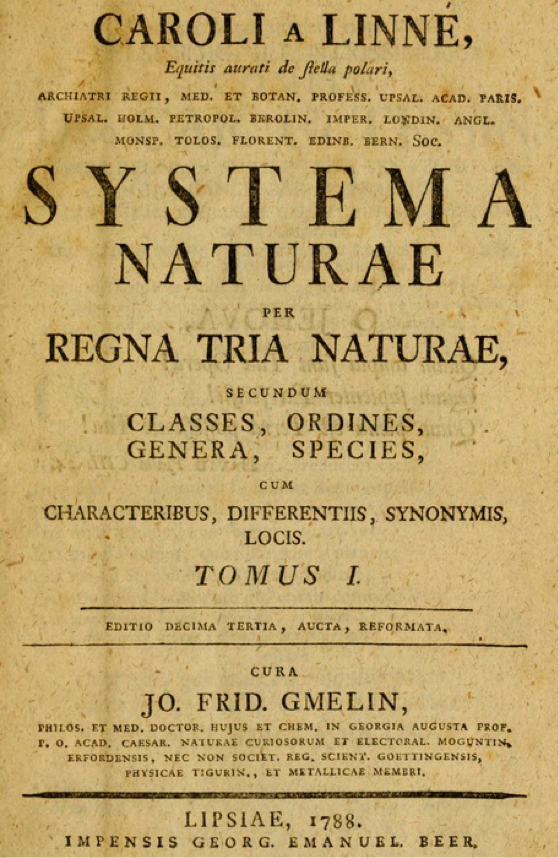 Pierre Joseph Bonnaterre (1752-1804) was a French priest and naturalist who contributed to the “Tableau Encyclopédique et Méthodique des Trois Règnes de la Nature – Ornithologie” (Encyclopedic and Methodical Table of the Three Kingdoms of Nature – Ornithology) published in Paris in 1790. This was a gigantic encyclopedia covering all living beings with 4 large tomes for birds only. Bonnaterre reused many of the Brisson, Sonnerat and Buffon plates and unfortunately copied some of their mistakes. Most of the illustrations show four birds in one page, allowing him to illustrate about 1000 birds in 240 plates. Volume 4 (illustrations only) of a later 1823 edition can be seen here. The Little Grebe Tachybaptus ruficollis was named by Bonnaterre in 1790.

This brings to a close this review of a century of ornithological publications with descriptions or illustrations of Philippine birds. Of the 245 Philippine endemic or near endemic species in the WBCP 2013 Checklist, 18 had been described and formally named by the end of the 18th century, some as subspecies that would later be elevated to full species. Of the total of 672 species in the WBCP Checklist, 209 had been described and named, but it should be noted that most of them were not described from specimens collected in the Philippines. The last few years of the century and the first 20 years of the 19th century would see a lull in ornithological research and publication mainly due to the turbulence of the Napoleonic Wars. Starting with the 1820s, the 19th century would witness an explosion of ornithological discoveries in the Philippines, as we will see in the next parts of this series.

Go back to Part 1