by Alexander A. Elias

I live 7 kilometers from the nearest town proper in the midst of a mix of cultivated and abandoned rice fields, coconut plantations, recuperating secondary forest patches aged between 10 to around 40 years. Several streams and rivers dotted with small rocks run through the area. Our area is on a plateau 400 – 500 meters above sea level, facing the Pacific with the 2.2 kilometer high Banahaw mountain complex on its west border, gathering clouds. The area receives quite extreme rainfall of around 5,000 mm annually. One can imagine that not only the most common birds are to be seen and heard.

The biggest waterfall in the Sitio Maapon area. Photo by Alexander Elias.

Close up of Maapon Falls. Photo by Alexander Elias

Of course bird presence is not the same all year round. This area has its share of migrants, some of them rare such as Green Sandpiper, Eyebrowed Thrush, White’s Thrush, Brown-headed Thrush, and Narcissus Flycatcher. Some days birds are abundant, other days it is so much more quiet.

The migrants had not yet arrived in July. In the weeks before the devastating typhoon struck, each morning I could hear and or see many of the birds that are resident and most common in our area in July. Balicassiao, Rough-crested malkoha (Red-crested Malkoha), Scale-feathered Malkoha, White-throated Kingfisher, Guaiabero, Colasisi, Philippine Cuckoo-Dove (Reddish Cuckoo-Dove), White-eared Brown Dove, Common Emerald Dove, Large-billed Crow, Black-naped Oriole, Coleto, Philippine Bulbul, Yellow-vented Bulbul, Elegant Tit, Flaming Sunbird, flocks of mixed birds with Lowland White-eye, Yellowish White-eye, Philippine Pygmy Woodpecker, Red-keeled Flowerpecker and more kinds of flowerpeckers, and Purple-throated Sunbirds. The White-breasted Woodswallow has some nests on an adjacent property. Often but mostly on days with nice weather the Philippine Serpent Eagle. In the rice fields whether or not abandoned the White-bellied Munia, Barred Rail, White-breasted Waterhen, Cinnamon Bittern. There are also many other less common birds such as the Black Bittern that are seen less frequently. There is almost not an evening passing by without hearing the Luzon Scops Owl and less frequently but still often the Philippine Eagle Owl. Sometimes the Great Eared Nightjar. On other occasions the Philippine Nightjar. Along a small stream here on the property I can regularly spot the rare and very shy and inconspicuous Indigo-banded Kingfisher and the Blue-headed Fantail. Very seldom, the Rufous Paradise Flycatcher. 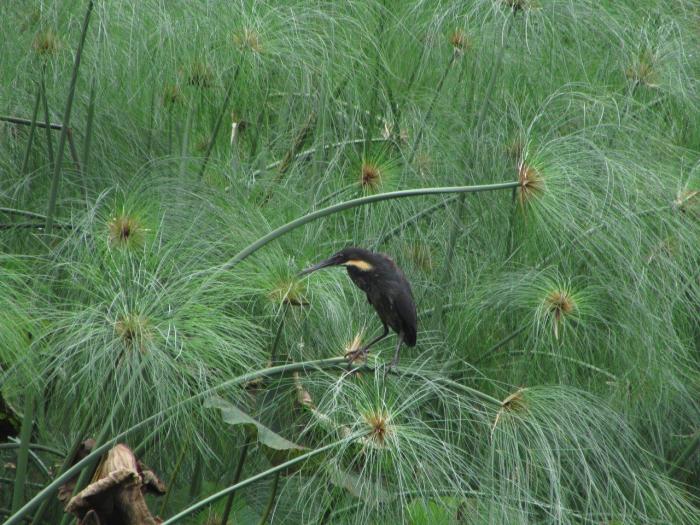 Besra at the farm. Photo by Alexander Elias.

In another Sito of our Barangay where I also regularly sleep, is an area bordering disturbed primary forests and older growth secondary forests and forest patches. Here we can hear and see the Rufous Hornbill, Luzon Tarictic Hornbill, Spotted Wood Kingfisher and some others which we do not see and hear in Sitio Kabilang Piis where I live. The area is marked by steep hills going down to the main Maapon river.

Typhoon Glenda actually came as a bit of a surprise. It is not normal for our region to be visited by a strong typhoon in July. The same morning of the day she struck our area, it was still featured as a category 1 typhoon. In a matter of 12 hours it became a category 3. It was probably even stronger, given the impact. Glenda started with her howling and devastating winds around 12 midnight. Never have I experienced a typhoon with such strength. Sleeping was out of the question. Even though I have a very sturdily-built bungalow type house and am surrounded by patches of forest, the house shook many times. I could hardly see anything as the electricity was out. The noise was deafening. But you could still distinguish the terrifying sound of a crumbling forest. The typhoon also lasted unusually long, 8 hours, and its winds came from 3 directions. This was very unusual also. Normally the wind first comes from the west, then from the south after the eye passes. Now after the west wind it came from the east with a devastating force, before turning to the south with equally devastating force. Honestly, I trembled with fear at many occasions. The forces were unimaginable.

The next day the crumbled forest made me immediately think of what I saw in Coron last April, where many forests were also downed or severely damaged by Yolanda. It wasn’t as bad as Coron here in Quezon, but it wasn’t much less severe either. Almost no tree escaped unharmed. Many tumbled, others got beheaded, most of them lost several branches. Some trees were left almost without a leaf. I immediately thought ‘what about the birds ?’. And I wondered if the impact of typhoons on bird life had ever been studied. It cannot be anything else than devastating for them also. Their livelihood ruined for the greater part. And where do they hide ? Everything even up to the ground level had its impact.

These were lush, dense forests. Photo by Alexander Elias.

Even the coconut groves were full of secondary growth in between. Photo by Alexander Elias. 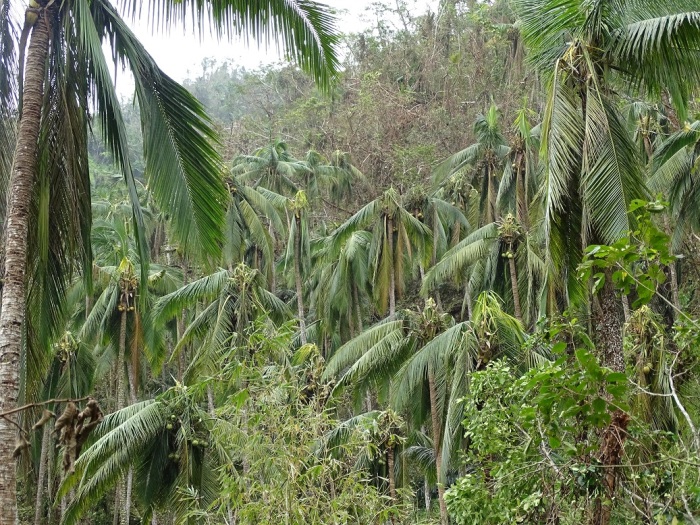 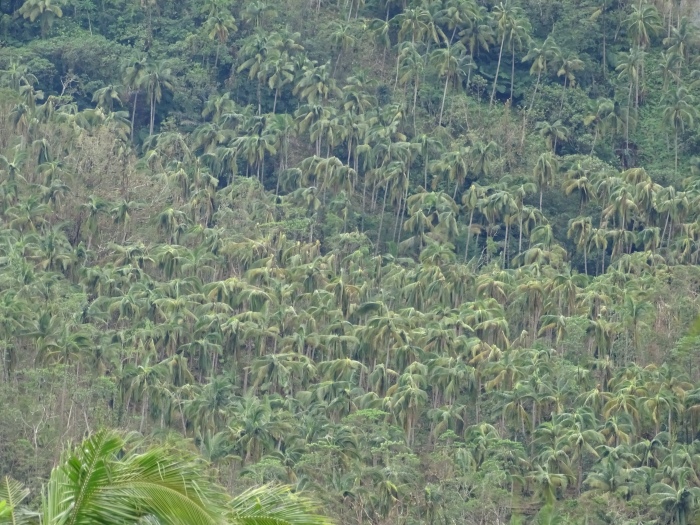 That morning the area was void of birds. And with the lasting rains and wind you could not expect them to come out of wherever they were. The only bird I could sometimes hear was the Philippine Bulbul, one of the most common and noisy birds in our area.

I anticipated that fruit eating birds would have a hard time to survive as most of the fruits were gone, even if the trees were still standing.

The first 2 weeks after the typhoon, it kept on being really quiet. Gone were the noisy mornings with the peculiar sounds of the Balicassao, Black-naped Oriole, hordes of Philippine Bulbul, screams of the White-throated Kingfisher and the elegant calls of the mixed groups of small birds foraging through the forests. And the soft short calls of the Rough-crested Malkoha. And so much more.

The sightings of birds suggested that the visible numbers went down to 20% of what it was before the typhoon.

The calls from all kinds of pigeons and doves were completely gone for 6 weeks. The so warm and typical sounds of the White-eared Brown Dove, Common Emerald Dove and the Philippine Cuckoo Dove, gone. The hordes of noisy Colasisi and Guaiaberos, gone. Scary was the total disappearance of both the Rough-crested and the Scale-feathered Malkohas. Before the typhoon, both could be seen and heard every single day.

After 2 weeks, more and more insect eating birds came back. But after one month I guess the sightings were still at 40% of what is was.

It took 2 weeks before I could see again a  Rough-crested Malkoha and 1 month for the Scale-feathered.

And 6 weeks before I could hear, still a fraction of what is was, the White-eared Brown Dove.

We are 2 months further in time. Philippine Cuckoo Doves and Common Emerald Doves can sometimes seen flying, but they are still not making any sound. The Philippine Coucal can be heard sometimes, but rare compared to before. The Rough-crested Malkoha and the Balicassiao both seem to be as abundant as before. But overall still probably around 60% of the ‘normal’ quantity. The Scale-feathered Malkoha was obviously one of the worst affected. They became rare instead of common. At least for now.

I was very happy to hear the Rufous Hornbills again in Sitio Maapon near the disturbed primary forests on the steep slopes. Also the Luzon Tarictic Hornbill could be heard and seen. But if the numbers are still the same, I do not know. At least in that area some steep slopes seem almost unaffected. But even some deep gorges were devastated as well. Which surprised me. Did the Hornbills know where to hide? I have no idea, but it seems most of them survived the carnage.

In another area of ours, in Catanauan, Quezon, along the coast, we had an ever growing population of Pink-necked Green Pigeons. Just before the typhoon we could count 30-40. The ilateris trees on our property were specially spared to support these very beautiful pigeons. The typhoon left only some barren branches on the many trees. No fruits. The pigeons are gone. I hope once they will be back, if they’re not hunted or starved. Because I have no idea where they could go to find food. All of Bundok Peninsula was devastated.

I happened to visit a very small island off Busuanga last April. Yolanda passed that particular island and the broken trees were still evident. The few caretakers of the small private island told us how a group of 50 – 100 Pied Imperial Pigeons and an as large a group of were diminished to only a handful by the typhoon. They have no idea what happened to them. They guess they were just blown away. They didn’t find any death ones. They did find a dead White-bellied Sea Eagle, one of a group of 4 which were living on the island. The other 3 are still there. We could very well observe these mighty and proud looking Pied Imperial Pigeons and also the quiet and cozy Island Collared Doves.

These are just the observations of a biologist who happens to live in forested land and therefore feels and experiences everything that happens in it. I did not use a scientifically approved method to determine the effects of this typhoon. To scientifically study the effect of a typhoon on bird life, one should scientifically record all the birds one month up to a typhoon until at least 6 month after. The problem is that no one knows when and where a super typhoon will strike.

But nevertheless it is very obvious and without a doubt that extreme typhoons like Yolanda and Glenda have devastating effects on bird life.

So much food for those birds who managed to survive the extreme winds has disappeared overnight.

And with extreme typhoons getting more frequent and even more extreme, we have all the reasons to worry about our already difficult situation for our bird population. Its numbers as well as its diversity.

The few forests left by us humans for them to live on are now crumbled by extreme typhoons.

This is another reason to do everything in our power to conserve and even create more living space for the wild birds of the Philippines in as many places as possible and with that all the other groups of creatures. We also should do something to stop the direct killing of birds by humans in our country which is still rampant.