For a number of months in 2011, Rene Calado used to tell to me about the resort that the Browns were setting up in Tanay and enticing me to try it out once it was finished. The much awaited trip took place at the end of October of that year. Rene, Alex Tiongco, Tere Cervero, and I were hosted by the Browns to make a reconnaissance tour of the property and see the birding possibilities of the property. The place was gorgeous. Thick vegetation, primary and secondary forest, wide trails, and birds, many birds. 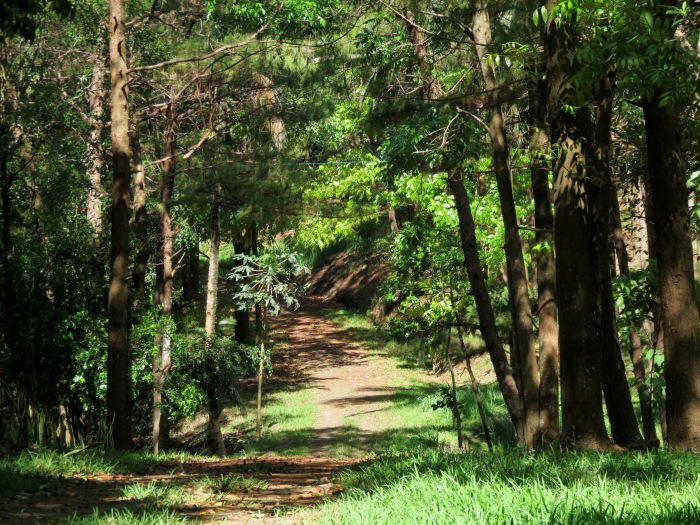 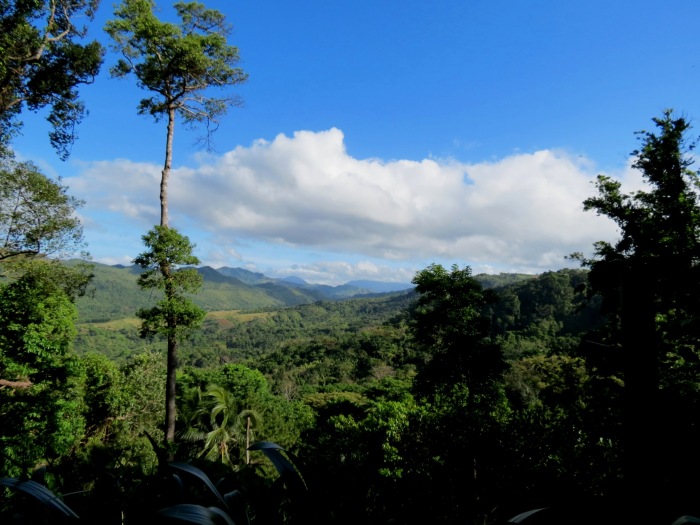 We did birding in the afternoon of Saturday and, later that day, Mrs. Annabel Brown arrived at the camp to get an update of our expedition and to experience birding herself. She came with plenty of grandchildren and their friends. Sleeping in the same birding venue has its advantages, as we just walked up a little before sunrise. Mrs. Brown and her (sleepy) progeny were waiting for us. After the usual introduction to birding and how to use the binoculars, we walked down the first trail. It did not take long for everyone to get excited by the full view of a male and a female Luzon Tarictic Hornbills. The scopes were very useful, as the hornbills were perched in some of the larger trees less than a hundred meters off the trail. Some minutes later, excitement resumed with a male and a female pair of Purple-throated Sunbirds, fully lighted by the sunlight on top of a rod. While taking a break in the trail, Boy, the experienced birder driver of Alex, saw a Rufous Paradise-Flycatcher, which we missed. The day went on, returning to the mess hall for breakfast and lunch. The very reliable Tere made the list at the birds list at the end of the day and I cannot recall how many birds we saw but they were more than 50.

Mr. Walter Brown joined us for lunch and shared how his father, Barker Hastings Brown, made it a point never to cut any tree of the property. The effect is obvious. Tanay Rainforest Camp is a little Subic closer to Metro-Manila. Subic’s rainforest has thousands of hectares. Tanay Rainforest just a few hundred, but for a day or two, I go to Tanay anytime. By the way, the Browns, have dedicated the park to the memory of Mr. Barker H. Brown.

Since that initial trip, I have been there a few more times, and I am aware that several of us in the WBCP have done the same. Small and larger groups, for one day or overnight, or even a few days, as when Alex brought his Japanese friends to do morning birding in the camp and to do raptor counting in the nearby Tanay Pagasa Station. The camp has become one of the birding attractions for those of us living around Metro-Manila.

Mrs. Brown and the staff of the camp have taken the natural richness of the place for bird watching very seriously. It must be already the third tarpaulin they have printed with pictures and names of the birds seen or heard since the beginning. So far, the list has reached 75, and some of them were discovered lately. In my last trip I was lucky enough to see and take pictures of the Philippine Hawk-Owl, formerly only heard. I suspect that there will be more discoveries as new birders visit the place. 36 birds in the list are endemic. There I first saw the Spotted Wood-Kingfisher, the Blue-Headed Fantail, and the Striped Flowerpecker. And I am looking forward to seeing the Violet Cuckoo, the Black-Chinned Fruit Dove, and the Bicolored Flowerpecker. Not to speak of the other resident birds I have yet to see.

The layout of the camp is very convenient for birding. Trails are wide and well distributed all around. A must go is the newly cemented pathway across the sleeping quarters. There I saw my first Ashy Ground-Thrush, and I always hear or see (although in the taller trees), the Luzon Tarictic Hornbill. Afterwards, there is a trail downwards, leading all the way to some rice fields. On the way back, turn right in the next fork and one will meet other trails in the upper area of the property, where I saw flocks of Balicassiaos and Ashy Minivets. It is easy to move around.

Access to the camp can be either through Marcos Highway via Cogeo, or through Ortigas via Antipolo and Teresa. I prefer the first route, which is the same going to Pagasa Station in Tanay, because there is less traffic and is very scenic; enjoying the great views of Sierra Madre. After Pagasa Station, one has to go on a few kilometers until you reach Sampaloc Baryo, turn right at the junction, and Tanay Rainforest Camp (Also known as Epic Camp) is just two kilometers away in your right side.  The other route is four kilometers shorter, 54 km versus the 58 of the Cogeo route, but much more congested. After reaching Teresa, turn left to Manila East Road, which bypasses Baras and Tanay. A few kilometers after Tanay, there is a marker indicating to go straight to Pililla and Jalajala, and to turn left to Sampaloc.  One has to take to the Sampaloc Road, and the camp is around 12 km in the left side. If you reach the Baryo of Sampaloc, you went too far.

A great advantage of the camp is that it has sleeping and eating facilities. It combines the beauty of the place, the bird variety, and the closeness to Metro-Manila with the comforts of civilization. The camp charges P200 entrance fee per person, with a 20% discount for senior citizens, children, and students. There are many types of facilities, from family rooms for 8 to 10 or dormitories for more than thirty persons at P600 per person; to single rooms with private bathroom and hot water for P1,500, or even a room for three for P2,000. Nothing luxurious, but clean and comfortable. The restaurant offers fixed menus from P100 breakfast for families to P350 diners. The lunch I took at P250 offered good and abundant quality Filipino food. Some members of our club were allowed to bring their own food for a day trip.

The camp is around 400 meters above sea level. The best time to visit is from November to March, when the weather is close to Tagaytay’s. Cool nights and not humid. As in any rainforest, the rainy season is humid and warm but it is still a charming place, with lush vegetation. The perfect place to leave behind the traffic and pollution of Manila, forget all worries, and get a very restful birding experience. No wonder, Tanay Rainforest Camp is one my much sought outings twice or thrice a year. And I wish it could be more times.