Starting this month, EBON will feature monthly articles on birding sites that will provide practical details such as how to get there, where to stay, and whether local guides are available. They will also describe the birding areas and list the birds that are most likely to be seen as well as those that can be seen with some luck. Some of the articles will repeat what has been published in the books “Birdwatching in the Philippines”, but will provide additional practical details and in some cases more up-to-date information. This month we feature Mount Polis and Banaue Hotel. I acknowledge the help of Desmond Allen who reviewed my draft and provided additional information.
space

Mount Polis is at the boundary of Mountain Province and Ifugao. The birding area is the road from the town of Banaue in Ifugao to Barangay Bay-yo in Bontoc, Mountain Province. Mt. Polis itself is a 2255m summit on the south side of the highest point of the road (which is at 1920m) but the whole area is known to birders as Mt. Polis. The provincial boundary is at the highest point. The forest cover consists of heavily-logged mossy forest above around 1600m and pine and mixed montane forest below. Birding is done along the road and along a trail that starts at the highest point of the road, on the right side of the statue of the Virgin Mary. The view from the trail towards Nueva Vizcaya is breath-taking. On a clear day you can see Dalton Pass and the Sierra Madre Mountains across the upper Cagayan Valley. This Mt. Polis should not be mistaken for another Mt. Polis which is popular with hikers near Sagada in Mountain Province. Incidentally, the locals will remind you that the name of the province is “Mountain Province”, not “Mountain”, and they particularly dislike their province to be called “Mt. Province”. 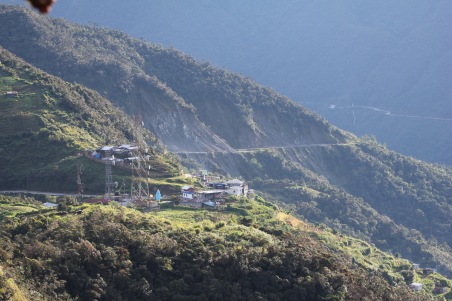 The road to Mt Polis seen from the trail. Photo by Christian Perez.

The view from the trail on Mt Polis. Photo by Christian Perez.

The birds most likely to be seen along the road and the trail are the Mountain White-eye, Chestnut-faced Babbler, Metallic-winged Sunbird, Mountain Leaf-Warbler, Little pied Flycatcher, Mountain Verditer-Flycatcher, Island Thrush and Philippine Swiftlet. The Luzon Bush-Warbler is also common but shy, staying near the ground in grass and bushes. It responds to calls and playback (to be used with moderation) and can be spotted with a bit of patience. It is important to be familiar with its loud and explosive call as it can be heard everywhere throughout the Cordilleras. The Luzon Water-Redstart can often be seen from the Ab-ab Bridge in Bay-yo at km 372. The bird hops from rock to rock along the river and can be easily spotted from the bridge. The bridge is usually the farthest point after which birders who stay in Banaue turn back to Banaue. Lowland birds that also range to higher elevations in Mt. Polis include the Blue-headed Fantail, Elegant Tit, Philippine Bulbul, Sulphur-billed Nuthatch, and many more. 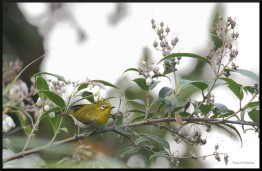 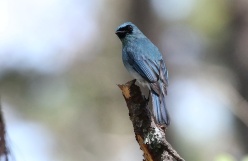 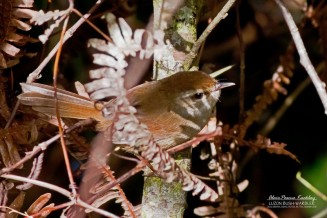 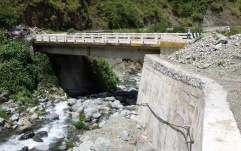 Other birds that can be seen with a bit of luck are the Citrine Canary-Flycatcher, Mountain Shrike, Mountain Tailorbird, White-browed Shortwing, Green-backed Whistler, Flame-crowned Flowerpecker and the migrant Olive Tree-Pipit during the season. In the mossy forest near the highest point you may find with a lot of luck the Flame-breasted Fruit-Dove, White-cheeked Bullfinch, Montane Racquet-tail, Tawny-breasted Parrotfinch (three were spotted by Ruben Bala along the trail on 19 July 2012), Grand Rhabdornis and Whiskered Pitta. Birds that you will find in the pine forest include the Red Crossbill (we saw a group of 15 foraging on the road on 19 July) and the Snowy-browed Flycatcher (two were spotted in the bush near the Ab-ab Bridge on 19 July, probably nesting there although we did not see a nest). 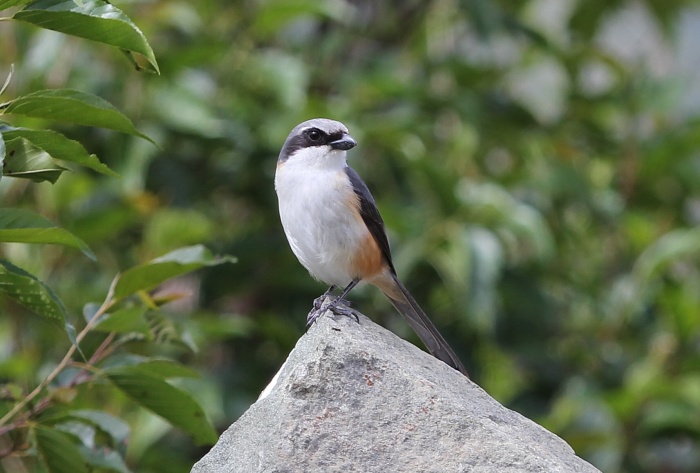 Red Crossbill on the road. Photo by Christian Perez. 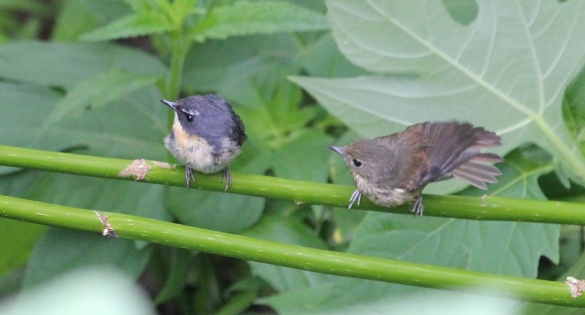 The migrant Common Buzzard is seen flying across the valleys, most probably from December to April. At night you can try to hear or see the Luzon Scops-Owl along the road (the forest around km 348 has been recommended). The Bukidnon Woodcock has also been reported in that area at dawn and dusk. The Long-tailed Bush-Warbler can often be heard from the road near the highest point but is difficult to see walking on the ground in the grass like a mouse. The holy grail of Mt. Polis birds is the Benguet Bush-Warbler, which can sometimes be heard calling from the thick grass in the Bay-yo area but is rarely seen.

The trees around the swimming pool of the Banaue Hotel yield a surprising number of interesting birds, and there always seems to be a surprise there, so it is worth spending some time hanging out around the pool. Some of the birds spotted there include the Yellowish White-eye, Citrine Canary-Flycatcher, Snowy-browed Flycatcher, Pygmy Flowerpecker, Scale-feathered Malkoha and Philippine Coucal. House Swift and Striated Swallow nest under the roof of the hotel and fly around the buildings. The Philippine Scops-Owl is often heard and sometimes seen at night, and several Great-eared Nightjar fly over the trees near the pool at dusk and dawn. Look out for the Mugimaki Flycatcher. I was also told of a recent report of Whitehead’s Swiftlet over the Hotel but that it was “without an identifiable photo nor an indisputable description.”

Although the Banaue Hotel is about 1300m in elevation, the birds there seem to be mostly lowland or mid-elevation birds. For example I have seen Yellowish White-eye (which Kennedy says is “below 1000m”) but not the Mountain White-eye (“above 1000m”). The Philippine Scops-Owl is there (“below 1000m but in pine forest up to 2000m”) but not the Luzon Scops-Owl (“above 1000m”). The House Swift is supposed to be “in the lowlands” and the Pygmy Flowerpecker “usually below 1000m”. For some reason Banaue seems to be lowland and mid-elevation rather than mountain in terms of altitudinal range.

For those who wish to explore more, there is also a good birding trail – the Awan-Igid trail – that starts a few km north of Banaue where the road does a sharp left. This trail leads to a village and from there either across to Barlig at the base of Mt. Amuyao or eastwards to Batad. The trail is good for Flame-crowned Flowerpecker and with luck Luzon Jungle-Flycatcher. Adventurous birders could try birding the road above and below Barlig and the trail up Mt Amuyao. There is a recent specimen of Worcester’s Buttonquail from near the summit and Montane Racquet-tail reportedly occurs in big flocks at certain seasons.

The most practical way to go to Mt. Polis is by private car from Manila. To reach Banaue, the fastest way is probably to take the SCTEX to the end, and from there go to Muñoz through La Paz, Victoria, Licab and Santo Domingo. The road from Banaue to Mt Polis and on to Bontoc was cemented in 2009. It is landslide-prone during the rainy season and can be cut for hours or even days. It is also possible to go to Banaue by bus and rent a vehicle in Banaue or hire a tricycle to take you up to Polis.  It takes 20 to 30 minutes to reach the first birding areas from the town.

The best place to stay is the Banaue Hotel (tel 074 386 4087 or Manila office 524 2513). A three-bed room including breakfast is P2,300 until 31 March 2013. The Hotel also has a much cheaper dormitory, and there are a few cheaper inns and lodges in town and a few restaurants. If you leave before 6am, the Banaue Hotel can pack your breakfast to take out the night before. A great advantage of Banaue Hotel is that you can bird from your room balcony and around the swimming pool area. I found the Hotel to be generally birder-friendly. There are two small coffee shops at the highest point on the Mt. Polis road that serve brewed coffee and simple local food.

The coffee shop at Mt Polis. Photo by Ruben Bala.

I think it is fair to say that it rains almost every day of the year in Banaue and Mt. Polis. If there is no storm or low pressure area, the mornings are usually sunny or clear, and it starts raining in mid-afternoon. The whole area can also be enveloped in dense fog. It is a good idea to plan to stay at least 2 or 3 days to account for the rainy “downtime”. As everywhere in the Philippines, the birds tend to be more showy in February to April than the rest of the year.

In my latest trip in July 2012 I found more areas of the mossy forest being cleared for agriculture both along the road and along the trail compared to my earlier trips. We heard the sound of chainsaws and the chopping of trees while walking along the trail and saw several freshly cleared areas and newly planted vegetable patches. Snares have been found in the forest there in past years including one with a trapped Whiskered Pitta.

Mt. Polis is one of the best and also one of the easiest birding sites in the Philippines, and I would encourage all WBCP members who have not been there to plan a trip there. No local birding guide is available but with a bit of experience the birding is relatively easy and a guide is not really necessary.