Founding Member and WBCP Past President Mike Lu talks about the role of the Wild Bird Club and its members in the Asian Waterbird Census. 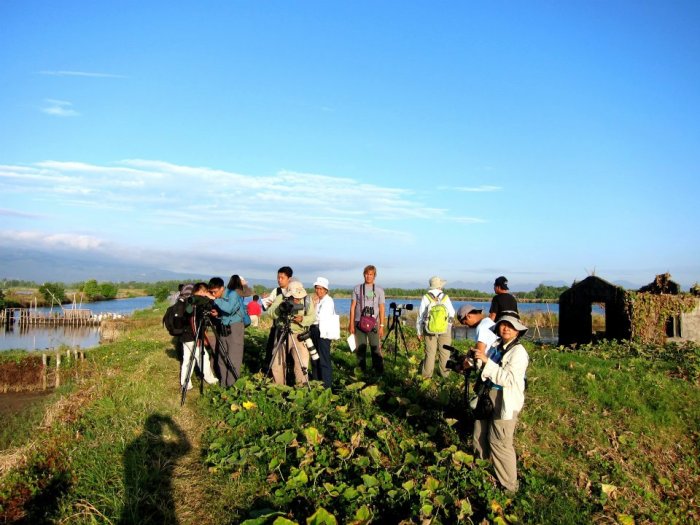 “One hundred twenty, plus two hundred, plus thirty five plus … what’s the running total for Little Egrets ?”

Every January, the members of the Wild Bird Club join thousands of volunteers across the Asia to count egrets, and other waterbirds for the Asian Waterbird Census (AWC).

This background information is taken from the Wetlands International website:

The Wetlands International states in their website that “the Asian Waterbird Census (AWC) is a regional programme to promote public participation to monitor the distribution and populations of waterbirds and status of wetlands. Hundreds of volunteers support this waterbird monitoring programme.”

The AWC covers the region of Asia, from Afghanistan eastwards to Japan, Southeast Asia and Australasia. AWC runs parallel to other international census of waterbirds in Africa, Europe, West Asia and Neotropics under the umbrella of the International Waterbird Census (IWC).

Information from the AWC contributes to the identification and monitoring of wetlands of international and national importance. It also assists decision-makers in designating wetlands to the Convention on Wetlands (Ramsar, Iran 1971), protecting threatened species and assessing values of wetlands. The data feeds into an international programme to maintain an overview of the population size, status and trends of waterbirds.

The census has been an ongoing effort since 1987. It is conducted by a large network of volunteers working through national coordinators. The AWC network is coordinated by Wetlands International. The Census has been annually organised during the second and third weeks of January.

AWC in the Philippines

The Philippine government through the Department of Environment and Natural Resources (DENR) joined the AWC network in the 1990s and through its regional offices monitors 50-70 wetlands annually during the census.

The waterbird species included in the count for the Philippines are grebes, cormorants, herons, ducks, geese, rails, jacanas, shorebirds, gulls, terns.  In addition, raptors, kingfishers and other species largely dependent on food resources in these habitats were also included. Wetlands sites include all types of natural and man-made wetlands including rivers, lakes, ponds, reservoirs, marshes, mangroves, mudflats coral reefs, ricefields and fishponds.

The waterbird count data and site information are recorded on standardized census forms and submitted to the national coordinators.  After collation, analysis and preparation of a country report, this data is forwarded to Wetlands International to be collated into a centralized regional database.  Regional reports and analyses are produced and widely disseminated.

When the Wild Bird Club was formalized in 2003, the Club had wanted to cross check our bird list with the DENR for wetlands in Tambo (in what is now the on-going Pagcor City) and Coastal Lagoon of Freedom Island (now called the LPPCHEA).

As president of the Club at that time, I got in touch with the DENR-National Capital Region (NCR) since both sites, the Tambo mudflats behind the Coastal Mall and Freedom Island along the Coastal Road, were  well within their jurisdiction in the city of Paranaque. I was promptly told that they do not have any data for these sites.  In fact, DENR-NCR does not participate in the AWC.

Instead of just handing over our data to them, Danish ornithologist and Club founding member Arne Jensen offered to conduct a series of training in bird identification and counting to DENR-NCR staff. DENR-NCR Regional Executive Director Cora Davis welcomed the initiative of the Club to jointly undertake the first AWC at these sites. Within 6 months of the Club’s founding on January 2004, the Club generated the first data for waterbirds of Manila Bay within the NCR for the AWC.

A year later, the Mayor Jerry Pelayo of Candaba asked the Club how we can help promote ecotourism in the Candaba Marsh.  The Club suggested jointly working with the DENR-Region III for the AWC and asked the mayor to publicize the activity through media. The mayor readily responded by calling in a big group of mediamen from radio, broadsheets and the major new programs on census day that census-takers almost ran out of parking slots on-site.  As a result of the high-profile media campaign, Candaba became known nationwide as a place to see migratory birds.

Having participated in the census in the last 7 years, the Club has contributed to the country records and to the overall awareness of the census.

Club members have documented at least three new species of waterbirds to add to the list of birds seen in the Philippines namely, the Eurasian Spoonbill, the Bean Goose and White-fronted Goose.  We have also added sightings of rarely-seen visitors such as the Pied Avocet, Great Cormorant, Spot-billed Duck, Mallard, Black-faced Spoonbill and others.

Our database for Freedom Island led to its’ declaration by then President of the Philippines Gloria Arroyo as the Las Pinas-Paranaque Critical Habitat and Ecotourism Area (LPPCHEA). However the Philippine Reclamation Authority has plans to reclaim the sea surrounding the area in the same manner that mangroves and mudflats were obliterated to make way for Pagcor City.

The mayor’s private property in Candaba Marsh has become popular across the country due to media reports as it continues to serve as an important oasis for wintering waterbirds. However, much of the adjoining properties are being cultivated and sportsmen still come for illegal duck-hunting.

On the northern end of Manila Bay where the mudflats and fishponds of Pampanga and Bataan hosts thousands of waterbirds, the City of Balanga with encouragement from the Club set up the very first wetland park in the bay to educate as well as provide a recreational area for its citizens and visitors.

Identifying waterbirds in their dull winter plumage and counting them can be very tricky.  As more and more members go out birdwatching and taking part during the census, we hope the Club would be able to conduct regular training sessions not just for birdwatchers but for DENR staff and the general public.

Birdwatching should be one of the cornerstones of ecotourism in the country.  Setting up and proper management of wetland parks are the next steps the concerned authorities must undertake in order to conserve the environment and earn from its protection.

Birds are environmental indicators.  The diversity or the number of species of birds in a particular site is indicative of the overall health for that particular site.  Obliterating whole ecosystems will also lead to obliterating our own race. When we in the Wild Bird Club of the Philippines volunteer to count birds for the Asian Waterbird Census, we are doing our bit to take responsibility for the waterbirds of the Asia and help stake out their place in the world.