Karen Ochavo writes about the boats, tricky birds, and adventures during the very fruitful birding trip to ANgat Dam that she planned and organized for WBCP members.

GOTTA GET TO ANGAT!
By Karen Ochavo

During one club trip early this year, Tinggay Cinco and I vowed to have an overnight birding trip at Angat Dam. Since I’m currently connected to a water utility company, I said that I could probably ask some of my connections to help me secure the necessary permits. After months of several postponements, and about four weeks of “walking and talking”—quite literally—for the permits, we finally made it last November 12 to 13.

View of Angat Dam and Reservoir from the Guest House. Photo by Karen Ochavo.

Angat Dam
Here’s a brief background on Angat Dam before I share our birding experience there. The Angat Dam and Reservoir are located at Angat River in San Lorenzo, Norzagaray, Bulacan. These facilities, constructed from 1964 to 1967, became operational in 1968 and are managed by the National Power Corporation (NPC). These facilities serve the following purposes: generate hydroelectric power that adds to the Luzon Grid via the Angat Hydro-Electric Plant (AHEP); provide water supply for domestic and industrial use in Metro Manila through the Metropolitan Waterworks and Sewerage System (MWSS) and its private concessionaires (Manila Water and Maynilad); provide water for irrigation in 20 municipalities and towns in Pampanga and Bulacan through the National Irrigation Administration (NIA); and reduce flooding to downstream communities.

The south western portion of the Sierra Madre Mountain Range drains into the Angat River and forms part of the Angat Watershed with a drainage area of about 568 km2. The forest cover of Angat Watershed is moderate to intensive. Downstream of Angat Dam is Ipo Dam which is a diversion dam that provides Metro Manila’s water supply via underground tunnels and aqueducts to the treatment plants of Maynilad and Manila Water in La Mesa and Balara, respectively.

Just imagine how important the Angat facilities and watershed are to the lives of millions of Filipinos in the country’s capital. So important that it is crucial to keep the Angat Watershed’s current forest cover as is or even further intensify it. Considering that birds are an essential part of the watershed’s ecosystem, bird watching in the area would help in confirming the actual condition of the watershed.

Boating
Our group arrived at Angat Dam on November 12, at around 3:30PM. Excited and not wanting to waste any time unloading our stuff at the NPC Guest House, we proceeded immediately to the NPC motor boat after meeting the Angat Watershed Area Team (AWAT) staff Nonong Villacrusis. Our adventure already began with the steep descent from the dam embankment road to the boat’s “dock” at the reservoir, which was a boulder on the shore and the huge logs afloat. One of us and her camera (I will not name who!) had a refreshingly unexpected dip in the water before reaching the boat. Good thing the camera wasn’t damaged!

Getting into the boat. Photo by Karen Ochavo. 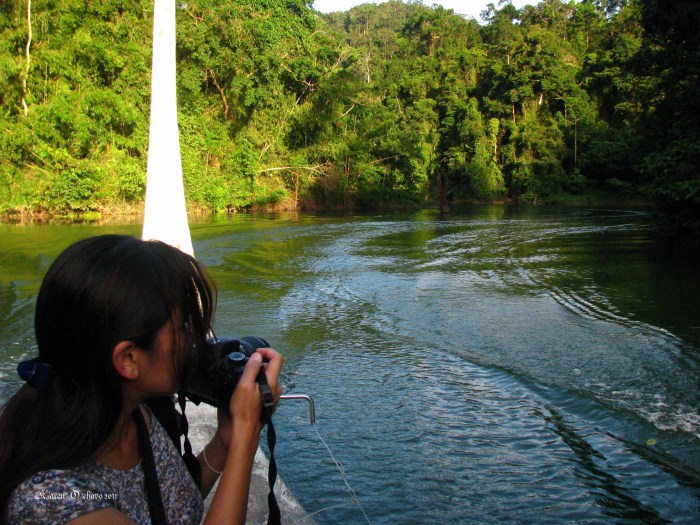 Des ready with her camera during the reservoir cruise. Photo by Karen Ochavo.

With Nonong as our captain and his son Ian as assistant, we cruised around the southern portion of Angat Reservoir. As we got closer to the forested shores, all binoculars were out looking for birds, with hornbills and raptors as main targets. It took us several minutes before finally spotting an Osprey perched on a bare tree trunk, feasting on its tilapia prey. Brahminy Kites were also seen in flight, plus an Indigo-banded Kingfisher that got scared off by the loud noise of the boat’s motor.

Osprey with its catch. Photo by Alain Pascua.

Our cruise lasted until sunset with only a few species listed. Of course our adventure for that day was not yet over as getting off the boat at the “dock” without sunlight proved to be more challenging than getting in it! But we survived through kapit-bisig and handy LED lights. At the rate of our unloading, some of us were able to spot a Blue Rock Thrush and heard Philippine Nightjars.

Moonlight
After the boat adventure, we all went to the NPC Guest House where dinner was already waiting. But the spectacular moonrise over the Siera Madre Mountain Range seen from the viewing deck was not to be missed! It was a perfect photo op with the full moon illuminating the reservoir, so the photographers were all shooting away. The scope was also set-up ala astrobirders to view the moon and Jupiter. After dinner, some of us decided to go owling around the Guest House compound but no owl was heard.

Boating or Trekking
Very early morning the following day, our group decided to divide and conquer the area. A party of five (Alain, Rey, Jun, Paula and Charlie) went boating again in search of the elusive Rufous Hornbill, while the rest of us trekked the trail downstream of the power plant and spillway. Unfortunately, no hornbills were seen by both groups, but seeing all the other highlight species made up for it, including a Grey-faced Buzzard, Grey-headed Fish-Eagle, Ruddy Kingfisher, White-browed Shama, Mugimaki Flycatcher, Little Pied Flycatcher, and Philippine Fairy-Bluebird.

Tricky Birds
The boat group got excellent photos of the often heard but rarely seen White-browed Shama. After boating, they attempted to go to the trail but it started raining before noontime. The trail group (my group) meanwhile saw a strange spectacle near the spillway: an Osprey bullying a Cattle Egret in flight! Then at the end of the trail, we were “tricked” by a kingfisher seen through the spotting scope. Each time one of us looked through the scope, a different kingfisher species was observed (either the all reddish brown, or the brown with bright blue). We finally realized there were two kingfishers spotted: a White-throated Kingfisher and a Ruddy Kingfisher. They were switching places on a distant shrub! Talk about major confusion, but then we were able to test our observation and identification skills with such spotting trickery.

Spotted a raptor from the trail. Photo by Tinggay Cinco.

Successful Club Trip
By noontime, all of us converged at the Guest House after a very productive morning. After a hefty lunch of tilapia and adobo, we packed up and took some group shots before leaving at around 1:30PM. Everybody enjoyed the Angat trip so much that they were already asking me to schedule a part two soon. Let’s wait and see!

View of the spillway from the trail. Photo by Karen Ochavo.