RAPTOR IDENTIFICATION:  WHEN YOU’RE PRACTICALLY BORED OUT OF YOUR SKULL AND WANT TO TRY YOUR SKILLS AT DOTS IN THE SKY
by Jon Villasper

So, you’re going on a raptor watch trip.  Hmmm…feeling confident with your raptor id skills, eh?

How do you identify raptors in the sky?  How do the beer-guzzling guys do it?  Well, mope no further.  Let me try to help you out.  You do know what raptors are, right?  They’re birds of prey that hunt for food during the day.  That separates them from owls.

The Philippines has several migrant raptor species, somewhere around twelve or thirteen, but in a typical raptor watch trip, you could expect about three to five species.  Three to five doesn’t sound like a daunting task but the birds are high up and are sometimes in mixed flocks.  That’s where the problem lies not to mention it is quite hard to tell one perched raptor from another.  So, here’s a quick way of identifying them birds.

The trick to identifying migratory raptors is to know what to expect and to read up on them before the trip.  Now, if you’re the lazy type you can just stand behind the experienced guys and repeat what they say.  Why waste precious brain matter, right?  No!  There’s no fun in that.  Fine!  You can use these pointers as your quick guide to some of the migrating raptors of the Philippines.

The birds below are the usual suspects in a raptor watch trip.

Silhouettes of 4 raptors by Jon Villasper

Here’s a rough sketch of the birds for your enjoyment. 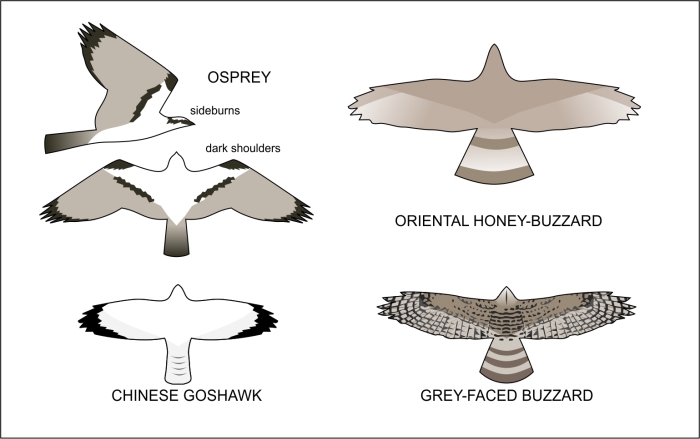 One more trick that you can use is to know which birds are in season at that point in time. Raptor migration happens twice a year for around two months at a time.  Fortunately, the bulk of these birds follow a more or less fixed schedule.  In autumn, Chinese Goshawks dominate the skies from mid-September until mid-October immediately followed by Grey-faced Buzzards until the end of October.  In spring, Grey-faced Buzzards leave first starting in March with Chinese Goshawks following suit by mid-April until May.  So if you are looking at a flock of raptors in the sky late in April, you’re most probably looking at Chinese Goshawks.

Then again, you can just wait for the older guys to shout out the ID.

One thought on “GUIDE TO RAPTOR ID”